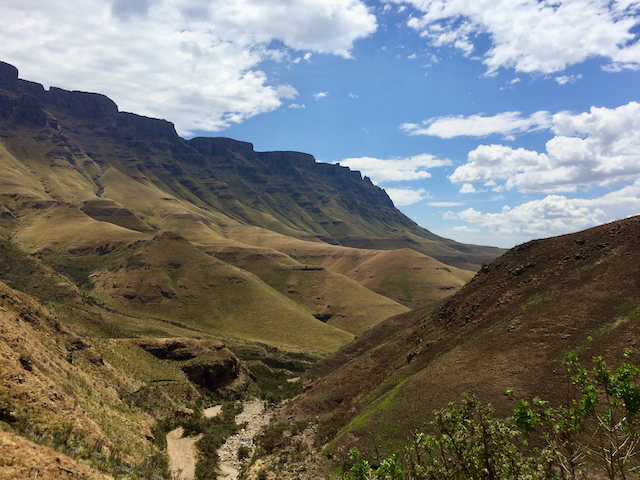 Yet another new country’s stamp in our passports! We arrived in Underberg, a small farming town in the foothills of the the southern Drakensberg mountains. One night here and then off up the Sani Pass into the mountain kingdom of Lesotho.

Underberg could not have been more different from our previous destination of Umhlanga Rocks. Umhlanga Rocks is the upmarket seaside resort near Durban, has a wonderful beach and is jam-packed with nice restaurants, luxury hotels and designer shops – it seemed very popular with the more affluent South Africans.

Underberg, on the other hand seems to exist to service the needs of the agricultural community in the region. The upmarket shops are replaces by markets, the posh restaurants by street stalls selling some amazing (and very cheap) food. Our drive here drove through what seemed like some quite deprived and poor areas – South Africa is indeed a land of contrasts!

Underberg is a very convenient base for a quick visit into Lesotho. It is just a couple of hours from the start of the spectacular Sani Pass which will take us up into the landlocked kingdom. We are staying at Cedar Garden Bed & Breakfast, a quaint place which is more like staying in someones home than a B&B. They kindly organised a tour for us into Lesotho with Stuart of Birds and Beyond http://www.birdsandbeyond.co.za via the impressive Sani Pass.

Stuart picked us up bright and early for the 90 min drive to the foot of the pass. The first part of the drive along the pass was on newly metalled road which will eventually wind all the way up into Lesotho to join up with the already finished Chinese built road on the other side of the border. It becomes quickly apparent why a 4WD is essential as the nice, smooth tarmac soon turns into huge ruts and giant boulders. Our little Toyota wouldn’t have stood a chance!

We reach the South African border post where we wait a very long time for our passports to be stamped. No particular reason for our wait, there were no other people in immigration when we were there. This was our first taste of South African bureaucracy which it seems, moves very slowly! Never again will I complain about the queues at Heathrow!

As we continue on into Lesotho the road gets ever rougher, steeper and with more hairpin bends the higher we go. Two of my motorcycling heroes, Charlie Boorman and the film star Ewan MacGregor, came this way in there epic motorbike trip from London to Cape Town, made into a TV series “The Long Way Down” worth a watch if you can get it on Netflix.

As we climb higher, Stuart points out the various points of interest along the pass, some aptly named like Suicide Ridge and Haemorrhoid Hill! So rough is the track that my iPhone step counter registers 11,500 steps and I haven’t set a foot out of the car yet!

A various points along the way, we stop, take photos and just look back in wonder at the incredible views. We have been privileged to have spent a lot of time in mountains around the world from the Andes to Asia and I have to say that the Drakensberg compare favourably with any we have seen.

8 kms on from the border post and we finally hit the top of the escarpment and the Lesotho border post. We park up and look back from whence we came – a breathtaking sight! Apparently once a year they organise a marathon which is run up and down the pass – now that really would be breathtaking! Rather them than me!

We get through Lesotho immigration in a blink of the eye. Such a contrast to South Africa, . though we did wonder what the dead goat hanging on the fence was all about?

We drive for a while along a seemingly barren plateau to a village. Approaching one of the handful of Rondavel huts, Stuart speaks with a woman and she invites us in to her home which smells strongly of smoke as she cooks on an open dung-fuelled fire in the centre of the circular room some 10 metres in diameter. The domed grass roof has no opening or chimney and is black with soot from 20 years of her cooking fire. The walls and floor are constructed of dung and mud yet everything is spotlessly clean!

This lady makes a living trading the produce she makes with the local shepherds who tend their sheep in the highland valleys over the summer before returning to the lowlands for winter. The two of items most in demand are her maize beer and her bread. She offers us both. The bread is red hot as it is just out of the pot, the beer, the colour of milky coffee. Both are genuinely delicious!

After saying our goodbyes tour host, we continue our drive a short way up to Lesotho’s highest point at 3240metre above sea level .

A quick scan around this desolate altiplano musing on how hard life must be up here and it is time to head back to the border for a long awaited (non-maize) beer at The Highest Pub in Africa, or at least that’s what the sign says. Apparently, someone has now built one higher in Ethiopia!

After lunch we head back back down the pass through the border posts and muse on the incredibly hard lives the Basuto people lead in Lesotho. Like so many other places in the world many are leaving in the hope of better lives elsewhere. Sadly with unemployment rampant at 29%, in South Africa I doubt they will find much joy there either. I wish them luck.

On the way back down we stop and marvel at the “Twelve Apostles” the range of mountain for which Sani pass is perhaps best known.

Once a British colony named Basutoland, Lesotho gained independence in 1966. Since then, as an effective island surrounded by South Africa it has undergone some considerable political turmoil over the years. It is very evident that this still a very, very poor country. The Chinese are the latest country to have taken an interest here. They are building roads throughout the country out of any altruistic motives, but in return for the mining rights to mineral deposits (mostly Cobalt and Diamonds). These impressive roads do not make their way to the villages which would help the people immensely, but are there just to serve the mining companies logistics. The villagers wait in vain to enjoy the electricity supplies enjoyed by the mining corporations. Sadly some things never change.