We have come to ‘The City of the Gods’ (which is how Teotihuacán translates) to see The Pyramid of The Sun.

The pyramid is both very impressive and very large!   A small sign at the entrance informs us that it is the 3rd largest pyramid in the world, and the largest outside of Egypt.

I didn’t expect to be able to climb such an ancient and important site, but that is exactly what is expected of visitors.  It is steep in places and it is hot,  but that is not stopping anyone from climbing to the top.    It is incredible to think this site predates even the Aztecs by about 1,000 years and yet, even with all the people clambering upwards, it seems so well preserved.

At the top we have a clear view of this vast, ancient archeological site.   In front of this pyramid is a wide avenue, lined with long stone steps which, to my untrained eye, look like high city walls. This avenue was originally 2 miles long and named by the Aztecs as Calzalda de Los Muertos (the Avenue of the Dead).  The Aztecs got it wrong though, as they believed the temples at either end were tombs, but still the name stuck.   Work is ongoing to excavate the whole of the two miles, but believe me, in this heat, there is plenty to explore right now. 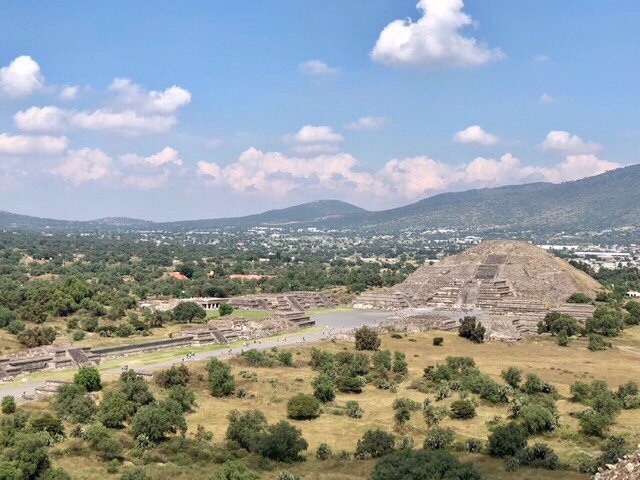 At the other end of the avenue is the Pyramid of the Moon, smaller, but no less impressive.

Inside one of the temples, is a cave which was considered to be the place where God created the world.   It’s not open to the public, but we didn’t find it anyway!

Mexico has officially designated special places as ’Pueblos Magicos’.  If this place is anything to go by, I can’t want to see some more. Magical indeed!

Buses from Mexico City Bus Station go very frequently. Cost MX$104 return ticket. The bus drops you right at the entrance. We didn’t book ahead. If you are driving, there is a free car park on site.

For foreign visitors the price is MX$70 (and includes visits to a nice toilet!)

9am to 5pm. It’s one of the few sites open every day, including Mondays.