The worlds biggest cave is 9km long, 200 meters high and so wide that a jumbo jet fit inside with space to spare.   I read about this cave a few years ago when a joint British/Vietnamese team surveyed the whole cave system and published the most amazing photographs of the inside alongside the story of how the cave was discovered deep in the jungle by a local farmer.  The photos inspired us both and so here we are in the Quang Banh region of Central Vietnam.

The cave, (known as Son Doong) is one of the many cave systems within the vast national park that protects the limestone mountains and jungle landscape.

Son Doong opened to the public in 2013 and it’s hard to gain access. There is a 12 month waiting list, a $3,000 fee and entry limited to 800 people a year. To get to the entrance is a 6 hour mountain trek and to explore takes a further 4 days hiking, climbing, caving and camping within the cave system which extends massively beyond the huge cavern to another 150 caves.  That’s too hard core for us.  We are here to see the cave system known as Paradise Cave and to explore a little off the beaten track in and around the National Park of Phong Nha-Ke Bang.

Paradise Cave, like Son Doong, is also a very large cave system – it extends 31km deep into the limestone mountains and has been open to visitors since 2010.   Most people stay on the boardwalk which is an awe-inspiring 2km walk inside the cave, passing a multitude of differing rock formations, fossils, stalactites and stacalmites dating back an incredible 300 million years. 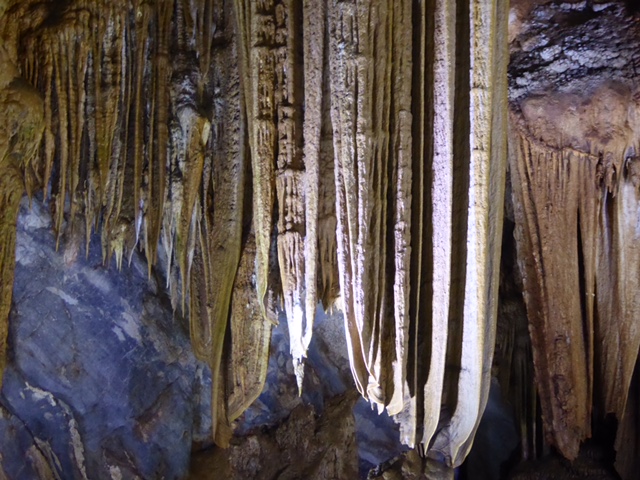 Despite the large number of people that troop down the steep wooden steps at the entrance (see below),  the cave is so huge that literally hundreds of people all but disappear into insignificance once inside.

Paradise Cave is an incredible natural wonder.  It has enticed many Vietnamese to visit and numbers of foreign visitors are now beginning to escalate.  Much talk has been made of the 2km walk to the entrance, but electric carts now whizz you along.  There is a climb up to the cave entrance, but this is a sloped path that winds back on itself as you ascend – the arduous part is the heat and navigating around the selfie photographers that stop every minute.  Once inside it is much cooler.  The strange and wonderful rock formations are mesmerizing in scale,  from 10m in height up to about 80m, that people seem tiny and insignificant by comparison.

The amazing thing is that modern day explorers are still discovering new caves hidden in this diverse ecological landscape of karsts and primary forest.  As new cave systems are being mapped and officially recognized,  licenses are being granted for exclusivity rights to tour operators for commercial purposes.

Our next stop of the day was to one such exclusive cave.  It also proved to be rather illusive, although not actually that far from the roadside.  Clambering though a gap in the vegetation and down a steep dusty slope so treacherous that most, if not all, of the people in our small group lost their footings and either slipped a way down or landed with more of a bump.  Next, a track through the jungle passes alongside several bomb craters in the ground, a not so subtle reminder of the Vietnam/American war.   The Mines Advisory Group are still active doing brilliant work in making the area safe from unexploded ordinance from this time.  This cave, named Hang Tra Ang, only became accessible less than a year ago.

I find it amusing Hang Tra Ang translates to Good Luck Cave and wonder who got to name the cave.   The plan is to scramble over the massive boulders at the entrance of the cave and then swim 300m into the dark recesses of the cave.  Clive is the more accident prone of the two of us and is not really that keen on long swims, so I am hoping good luck is on our side.  First we must don a life jacket, hard hat and sandals.  Luckily our sandals are good to go as the kiddy style jelly sandals provided only come in one size (Vietnamese XL= Small).  The hard hats are builders style with a headlamp attached. The life jackets are attached by straps around and under us.  Or at least they are supposed to, but most are too short to reach.  We all look ridiculously funny.

Quite excited, we set off, wading through the fast moving stream.   Climbing giant smooth boulders in swimwear and wet sandals is not easy, elegant or particularly safe. Excitement morphs into to deep concentration.   More than a few expletives are being muttered nearby.  Our small group do manage to make it over without incident and are gathered looking into dark water at the mouth of the cave.  There is no option but to jump in and swim.  One by one the headlamps disappear into the cave as a string of swimmers make progress against the current.  The cold water takes our breath away.

I love it that we are last in and so get the full effect of the dark, silent waters.  This is the most spectacular wild swimming I have ever done.  I cannot stop grinning as I glide along with nothing but my headlamp to illuminate my way.  I don’t want to catch up with the others, but it is inevitable.

The less confident swimmers are struggling midway as the effort begins to tell.   The guide at the rear cannot swim, so is clinging to a route he knows.  The life jackets do actually float so there is no danger of drowning.    Clive is not having much fun as his  jacket floats so much that is raises above his shoulders making it hard to move his arms and so he adopts a difficult backward seated sculling type movement.  Nearly 300m inside the cafe there is a rocky outcrop that we are all expected to meet at.  Once gathered, the headlamps go off and we sit in the complete darkness listening to the resident bats before trying an echo/shout out.   Then it’s time to leap back into the water, and swim back, this time with the current helping us along a little. I love this so much I swim forwards and then swim back again to prolong this fabulous experience.   Clive and a few others don’t seem to feel the same way, especially when we look at those giant slippery boulders at the cave entrance that we now have to climb, only this time dipping wet.

The remainder of our day included a stops at a memorial cave and a temple along the “Ho Chi Minh Trail” famous as key route from North to South Vietnam during the American War.

Many people expect something far grander of the HCM trail that what is actually here, which, in reality, is not a single trail but a series of well hidden pathways through the jungle.  The United States forces tried unsuccessfully to obliterate the trail with sustained bombing campaigns making this the most bombed area in the history of warfare.

Tomorrow we will jump on bikes to explore more of the lush green countryside.  It has been a very special day – I loved my ‘hat and shoes swim” in the dark.  We both agree we will always treasure our visit to these spectacular caves.

We visited in June 2017.  If you are traveling to Phong Nha and would like more information on travel, accommodation, tour choices and getting around, please contact us.  We are in the process of compiling an information sheet.

credits : the photos marked with * are courtesy of Getty Images,  the rest are our own.