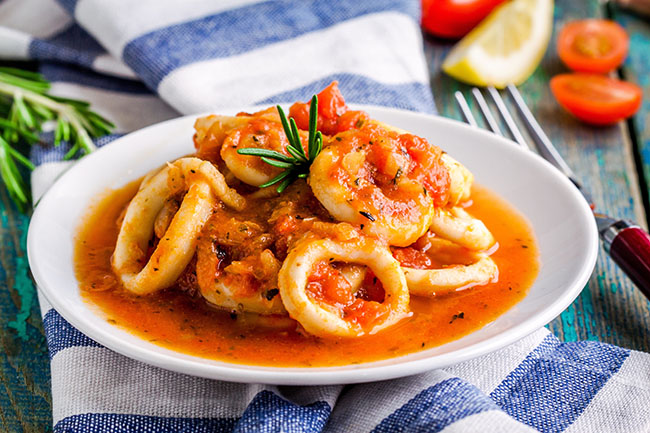 April 14, 2017 Carolyn Food, Food in EUROPE, Recipes, Spain Comments Off on Squid with Chorizo and Sherry

“IT IS NOT CHORE-RITZ-ZIO !” shouts Mario.

We are sitting quietly sipping our drinks at a Tapa Bar in Malaga. Pablo leans over to us and whispers “I lived in London, they don’t all say chorizo like this, they don’t all get it wrong”. We had ordered our food and drink in Spanish and feel quite pleased that we are not lumped into the group from England that is annoying Mario so much with their ” Chore-ritz-Zio” pronunciation for chorizo. As Mario continues with his chef management duties he mutters……

“Where is the T in chorizo? It is not there!  What’s this with the “zio’. There’s no I after the Z.  Tell them we have no chore-ritz-zio. Tell them we only have CHOR-REETH-O and it is much better”.

Pablo, the waiter, does not tell the diners anything. He is hoping for a happy clients during his shift tonight. Mario continues to mutter and waves his huge knife around.

We ordered Mojama (pronounced mo-ham-ma, since you ask) and are happy we did not order the aubergines, a very difficult pronunciation. We also have artichoke hearts the house speciality to look forward to….. And some delicious squid (with chorizo!). The recipe is equally, if not more delicious made with fresh live mussels in place of the squid rings.   It is easy to cook and something we enjoy quite often.

This recipe is so typical – using ingredients which seem to be common to so many local dishes. Most authentic dishes in this region use local ingredients, so the sherry is from Jerez, the tomatoes, garlic, parsley and potatoes are all grown locally and no self respecting cook will be without a Paprika. This dish works perfectly well with tinned tomatoes and any dry sherry.    See the notes below if you prefer to use mussels.

*if using mussels, use 1kg live shell-on mussels and omit the potatoes.  Make the sauce first then pop the mussels on top, cover with a lid and steam for a couple of minutes until the shells open.

Thanks to David Sharland (Flying Fish Seafood) for the recipe. Previously appeared in Food Magazine. They have some great fish recipes.