The guidebooks describe Villa de Leyva as “one of the most beautiful colonial villages in Colombia”.

We were travelling there from Barichara further to the north. This required a change of bus in both San Gil and and Tunja. It should have been a 5-6 hours journey and probably would have been if our bus hadn’t been hit by another one coming in the opposite direction!

We were just just an hour away from Tunja and looking forward to the last stretch of the journey. Thankfully no one was hurt but we did have to hang around for three hours until the police arrived to sort out the mess. As we waited, some of the other passengers began to drift off, hitching lifts in cars or collectivos. We decided to stay put and eventually rolled into Tunja where luckily we were able to jump on a collectivo for the last section of our epic journey. Such is bus travel in Colombia – it could have been a lot worse… 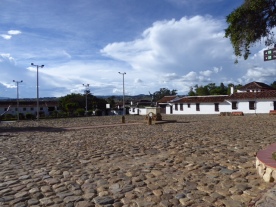 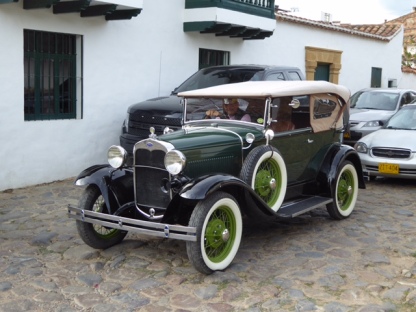 The guidebooks also Villa de Leyva it as “a city frozen in time” and I suppose it was a few years ago before until the explosion of gourmet restaurants and boutique hotels built to service the needs of the residents of Bogotá escaping the city at the weekend when it can get very busy. It is a very pleasant place and a relatively easy trip for Bogotá.
What sticks in my mind after leaving VDL are the cobbles. Every street and plaza is built with very large cobblestones! Plaza Mayor, one of the largest plazas in South America is also build from these giant stones. No wonder there are so many people walking around with limps and sticks! It really was quite hard work and definitely not the place to ride a bike.

It was to the Plaza Major that we found ourselves gravitating towards each evening. Rather than sit at one of the tables at the tourist orientated restaurants and pay 5 times the price for a beer,  we would join the locals and grab  a couple of beers  from one of shops and sit on the steps to watch the locals flying their kites as the sun went down. Lots and lots of kites – a miracle that they didn’t get tangled up. Often we would be joined by kids playing their guitars, drums and a variety of traditional folk instruments. This is the life! 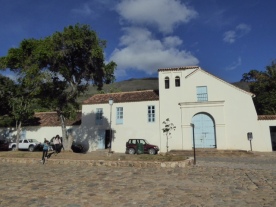 We planned on spending a week here but ended up spending to as both of us came down with viruses on our way down from Barichara. As a result we didn’t actually do that much apart from hang out and relax, hence the brevity of this post. It was no hardship as it is a lovely place to spend some time.

We rented a cottage for our first week. It was 10 minute walk uphill from the Plaza Major, near the market. The cottage itself was open plan with a huge lounge area, a mezzanine bedroom, large bathroom and well equipped kitchen (great to be cooking our own food for a change). All this was at the end of a quiet lane and situated in a huge garden. The wood burning stove was a welcome feature for the chilly nights.

Fortunately for us the weekly market was on the day after we arrived, so we were able to stock up with some amazing produce so that we could make best use of our kitchen in the cottage.