May 3, 2016 Carolyn AUSTRALASIA, New Zealand Comments Off on An encounter with Wild Pigs

The road is known as the 309.   To us, it was an arduous trip, long stretches of roadworks, lots of mud and more like “deliverance country” than the scenic drive through native forestry we expected.  We did not want to leave our campervan parked up to go for a walk. A very near miss with a driver hurtling at us while on the phone and on the wrong side of the road side coming round a tight bend did nothing to endear the road to us – we later found out that the road is known for a high number of deaths.

What did make our day, was the amazing encounter with the wild pigs.

The 22km of winding, unsealed road between Whitianga to Coromandel is named as the 309 as it used to take 309 minutes by horse drawn carriage to complete the journey.

The rest of this post is an excerpt from the amazing blog “Adventures in Wonderland” as we had exactly the same experience and could not have put it better.  The link to the original full blog post is at the end of the post.

Wild Pigs on the road

We’ve driven about three quarters of the way, through beautiful green countryside, from the sea at Whitianga, up and over the ranges towards the sea at Coromandel Town. Suddenly up ahead we see pigs at the side of the road. Pigs. Many of them. Pigs of all ages, from tiny little squealers to large adult males. Sixty-two pigs to be exact, roaming and rambling at will, and in their midst several chickens and a barefoot curly-haired man, all grubby sweats and plaid shirt and smiling bright eyes. So we stop of course and have a long conversation with Stu the Pig Man.

Stu lives in the bach. He gestures to a corrugated building across the road from where we are standing in amongst the pigs. In New Zealand ‘bach’ is short for bachelor pad, meaning a one-room home or apartment. 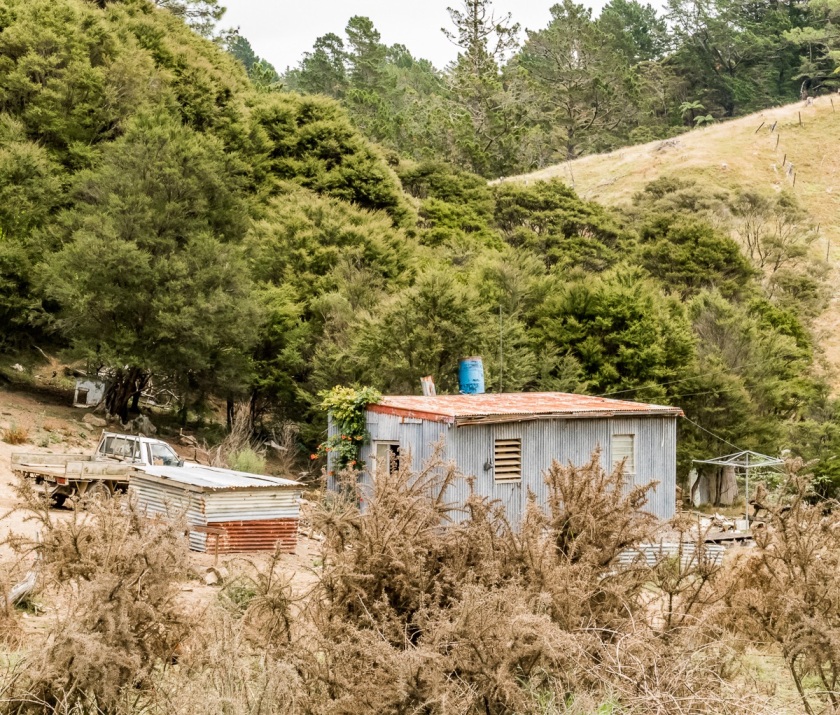 The tract of land, nine hundred acres, was acquired by his father shortly after the second world war.

The pigs are feral, having descended from the pigs brought to New Zealand by Captain Cook in the late 1770’s. Wild pigs proved to be just as destructive to the New Zealand native forests as deer, and are openly hunted. But not by Stu.  He doesn’t raise them for food or for sale. These pigs are Stu’s pets. All sixty-two of them.

He knows them all by name.  He talks about the sow and her piglets, pointing out that the bigger piglets are actually the offspring of another sow, but they push in and suckle from the sow that most recently gave birth. It’s not fair, but what can you do?

In the winter the pigs sleep in the bach with him. He says they keep him warm. He also has a satellite dish hooked up to an old trailer.  When he watches TV the pigs come in there too.

At one point during our conversation one of the locals stops to give Stu some old bread. In a heartbeat all the pigs are crowding round him jumping up to get some. 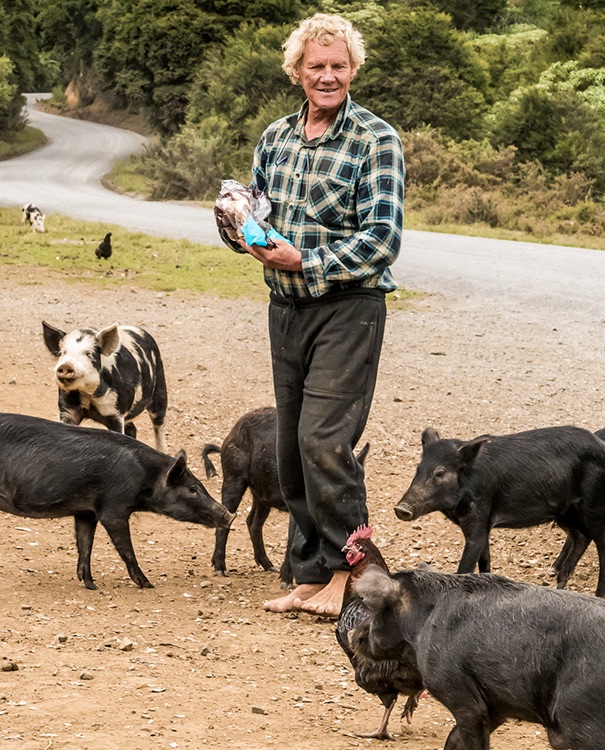 Stu is clearly a happy man. His bright eyes smile as he looks directly at you, his love for the land, for the earth, for every one of his pigs is palpable. There is no guile, no pretensions, no caring about social norms. What there is, is a big smile, an open heart and gentle kindness. His quiet joy is infectious and we feel lucky to have met him. And his pigs.

We knew nothing about Stu beforehand but discovered later that he is actually listed as an attraction on the Coromandel Town website.