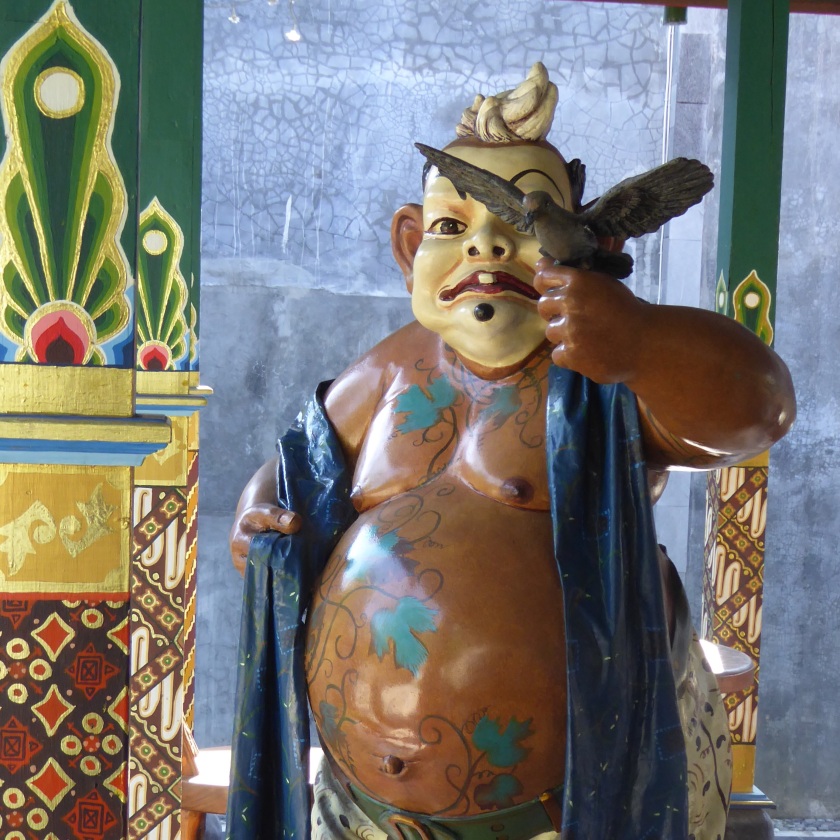 Don’t rush your visit to Magelang. There are lots of reasons to linger.

Magelang, Central Java is home to the wonder that is Borobudur. An ancient Buddhist structure in an overwhelmingly Islamic country. The town sees many bus loads of visitors who arrive from the larger cities, view the temple and are off a few hours later to the next sightseeing destination, most often,  leaving not so much as a tourist dollar or a cheery hello in the town. Despite this we found the townspeople really welcoming and very keen for tourists to linger a while. Those “fast-in-fast-out” visitors are really missing out as we found out.

It is heartening to see the police vehicles lined up outside the police station. The station is a wooden chalet and the vehicles all push bikes!

Another aspect which made us smile is the local taxi businesses. At first we thought the horse and carriages were for the tour groups, but no, the guys with the horse and carts are ferrying the locals to and from the local villages who want to come to town to shop in the market.

The market is very much a local market, patronized by townspeople only. You will find homemade tempeh, cheeses and weavings. The vegetables are beautifully ugly like the stinky beans or the knobbly pumpkins. The vendors all chat with us. I wish we had a kitchen, just so I could buy some of these things. 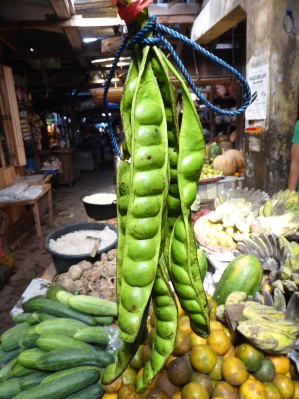 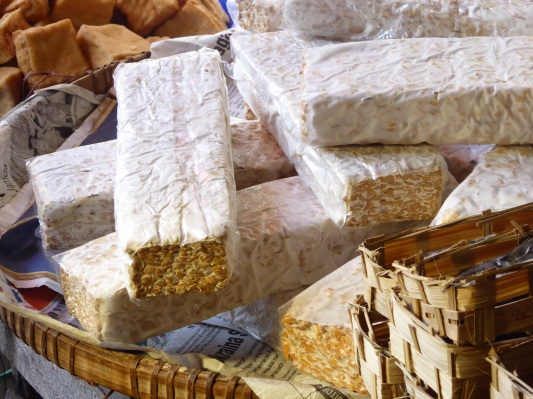 The food choices here are wonderful, especially the small local places, street carts, street corners and small open fronted eateries where the cooking is all done on the pavement. The food is part of the reason we stayed so long! We found so many lovely dishes (more about that in a later post!).

Being a muslim area (and during Ramadan to boot!), all alcohol is banned. At the general store, (looking like something from a cowboy western movie, and stocking similar goods), an old lady sidled up to Clive, led him to the drinks fridge, moved aside some cola, and revealed some illicit cans of lager! Yes, it was overpriced, but what a nice gesture! Banning the sale of alcohol in retail premises is fairly new in Java and as a result all off-licenses/drink shops have closed and supermarkets no longer stock booze.  Arrests have been made of those proprietors who tried to continue trading and the stories of police raids regularly make the news as a deterrent to those who choose profit over morality laws. Just walking along the main road, we were stopping every 5 minutes to chat with someone or other. Many were shy students in small groups stopping us, very politely, to practice their English. They got quite excited when they found out we were actually English. After a chat the “norm” was to be asked if they could take our photo. One (good) photo with us for each student. Getting the good photo takes about half a dozen attempts each time. How do the truly famous ever get to walk down a road?!? Luckily we have plenty of time and love talking with the students; I know we learnt more from them than they did from us.

To see some of the surrounding area, we hired a couple of bicycles. There was so much to see, a great day out. Without too much effort it is easy to see Borobudor across picturesque rice fields, but cycling out further into the countryside I well worth the effort.  We explored the surrounding villages, got a little lost, and saw many interesting and beautiful things. Some of the villages had home businesses, such as making tofu and were more than happy to invite us in to have a closer look. Generally, whenever we got lost, someone would appear and point us in the right direction and off we went, waving back at the people who came to see the odd strangers who had appeared out of nowhere.

We are not sure whether it was because of Ramadan but the hotels, restaurants, and the few streets seemed to be empty most of the time we were there. Owning an accommodation business seems to be the family business model to which people aspire. These, mostly new,  places are all really very nice. There are only a couple of big hotels (very expensive) and they are tucked away, one (The Manohara) in the temple grounds, the other a few miles away.  Mostly it is the small family businesses who have built a few rooms/cabins around a courtyard and have furnished and decorated them in a lovely way. These places offer really good value for money. I personally much preferred our room at the locally owned place to the one at the expensive hotel, lovely as it was. If you want fine dining/international fare/alcohol, the only place to find it in town is at the Manohara hotel. They do welcome non residents.