France fakes it(*), Cambodia have protected it and Michelin chefs can’t get enough of it.

Most people, if they have heard of Kampot, associate with it with Kampot Pepper, a premium food, loved by chefs around the world.  We visited the area to find more. 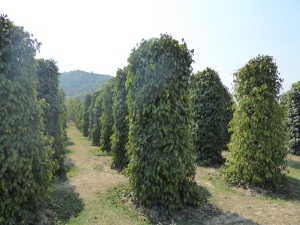 Pepper plantations in Kampot date back to the 1800s, but it was during the French occupation in the 1950s and 1960s that the pepper became really popular and huge quantities were shipped to the UK, France and the USA. So prized were the peppercorns that they became known as “black gold”. Sadly the farms fell into decline and ruin during the time of the Khmer Rouge in the 1970s, when Pol Pot relocated workers away from the area and (excuse the pun), peppered the area with land mines. Happily, today Kampot pepper farms are once again thriving.

The pepper plants grow up around a support.  Several plants grow around a brick tower around 10 feet high standing neatly, almost like field of regimental of soldiers.

The pepper grown here is now internationally recognised and registered under the “protected geographical indication status”. This means only pepper grown in this area can be classified as Kampot pepper, although we were warned many times that buying directly from the farms was the only way to be sure of getting the real thing, even in Kampot. Many well known chefs, particularly from Europe, rave about the delicate aromatic flavour Kampot pepper brings to their dishes. Rick Stein brought it to attention of many more gourmands when his TV series Far Eastern Odyssey spent some time enthusing about the unique properties of the peppercorn. Michelin chefs and film crews now regularly visit the area. 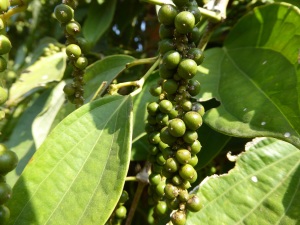 It is believed that Kampot pepper’s unique taste owes a lot to its place of origin – hence the GI protection. The spice is grown only in a relatively small area between the Bokor Mountain range and the sea in Kampot province – valleys and hillsides that are known for their mineral-rich soil, salt-heavy air and high rainfall. The altitude is also important. Caves in the nearby mountains are home to millions of bats, whose guano is used (mixed together with cow dung) to make an unusual, organic and highly effective natural fertiliser. In between the plantations are areas of scrubland. It is dangerous scrubland as, even today, hidden land mines are known to still be in the area; they are being slowly cleared so more planting will become possible.

We visited Starling Farm, the leading (and largest) organic farm of the region and owned by a Dutch/Cambodian couple. This farm has holiday homes, a posh restaurant and a regular stream of tourists visiting. On the whole, the rest of the pepper farming does remain very much a local artisan industry with 128 family farms now growing pepper, many of which operate organically. It is once again “black gold” as farmers cannot keep up with demand so prices are ever increasing, as are harvest volumes as plants mature. At the time of writing Starling Farm was selling organic peppercorns, direct from their farm and shops at between US$45-65 a kilo, (less than half the price of the exported pepper!). 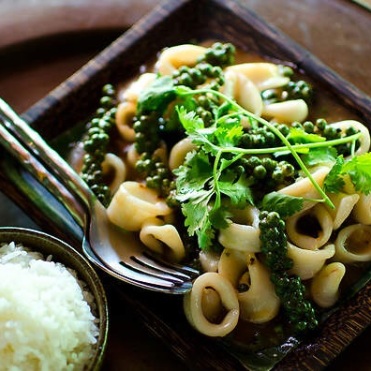 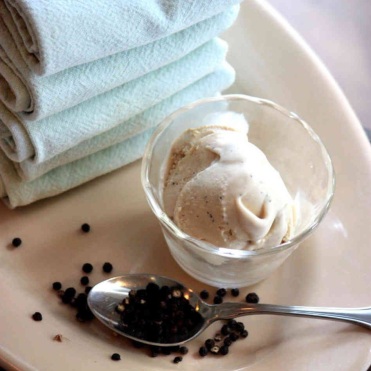 According to Jean-Marie Brun of GRET, a French NGO involved in setting GI rules for Kampot pepper,“If you look at France, you will see a lot of counterfeit [Kampot pepper] on the market,”  and  “Of all the pepper sold under the name, a tiny amount is real Kampot pepper.”