The bus ride from Salto through Uruguay is reminiscent of England – rolling hills and lots of cows. we are on our way to the capital city of Uruguay, Montevideo

Arriving at Montevideo bus station our first job is to find a place to stay.  Not easy as the tourist information office tell us that there is a huge convention in the city and there are only two vacant rooms left !

They book us a room in Casa Amor – loosely translated as Love House and off we head in a cab. Fortunately, given the name, it is not the brothel we were half expecting, but a nice enough place.

Montevideo could be described as a city of “faded elegance” . It has some wonderful architecture, some great shops and restaurants but is little run down. We spend our few days here just wandering around the streets and trying out a few of the local “delicacies”. 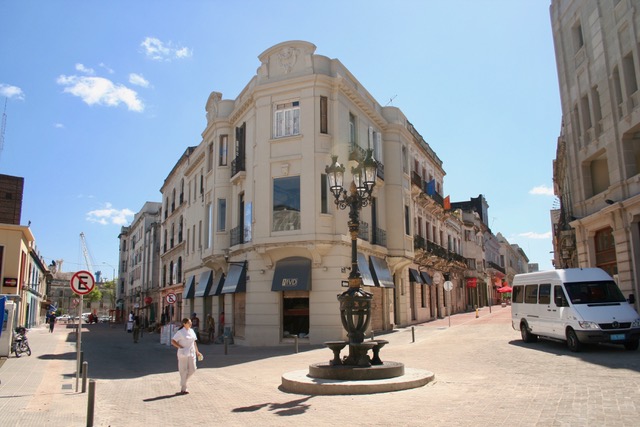 In one restaurant we order a Chivito para dos (for two). The waitress suggests one portion between us would be enough. A good job we listened as, a couple of good cold Uruguyan beers later, a gigantic plate of food arrived.

It consists of a huge pile of chips, salad, Russian salad, mushy peas which is then topped off with thin slices of steak, ham eggs and finally grilled cheese. Basically a coronary on a plate!  We are really looking forward to cooking our own food in Buenos Aires and start day dreaming about what we miss most – SALAD!

Exploring the city we head off to the market in the port area of the city. Many of the crumbling buildings seem to be in the course of renovation. It seem like an up and coming area.

We wander in to the covered market area and find not market stalls, but wall to wall Parrilla restaurants.  Even in Argentina, we have never seen so much meat! These gigantic barbecues are literally heaped with mountains of meat.  Beef obviously, but also lamb, chicken and the odd half goat thrown in for good measure.

Uruguayans and Argentines eat virtually all of the cow.  Not only are the cuts of the beef totally different from the UK and the US, but the insides and dangly bits (e.g. tripe, sweetbreads, intestines, pancreas and even the udders!), seem as popular if not more so than the premium cuts. 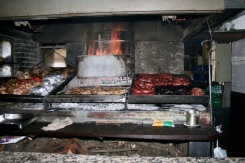 We pick out the busiest parrilla, sit down and still being unsure of the correct names for each bit we simply point at what we fancy and a chunks of meat are delivered to our plates. Our favourite of the achuras is the chichullines or intestines which are grilled until crisp on the outside – absolutely delicious but a bit like pate de fois, very rich! We also get our first taste of grilled udder. Delicious!

We like Uruguay often described as the least corrupt country in South America. It has one of the highest literary rates on the continent and apparently in the region the best health service. However, it lacks the spectacular scenery of the surrounding countries (although it does have some wonderful beaches).

Uruguayans love to shop. One of the most controversial shopping centers is Punta Carretas Shopping Mall.  It originally served as a prison up through the dictatorships of the 1970s and early 1980s and all tourist guides say that a visit is a must.  So off we go.

Getting there by bus was interesting as we pass through the upperclass area (Carrasco) where all the embassies are based, along with the wealthiest of Monetvideo residents.   The prison/shopping centre is in a beachside suburb of town and as we walk along the wide boulevard, which seems to run for miles, we feel that we could almost be in the South of France.

This area of the city lacks the colonial architecture but is a lot more upmarket than the centre with lots of wonderful house and apartments.  I can think of worse places to live!

Apparently the road stretches for more mile to Punte del Este, allegedly the Monte Carlo of South America and where many wealthy Brazilians and Argentines go for their holidays.