After a leisurely breakfast in the local panaderia we leave Chicoana and head off to Cachi. Although much shorter than yesterday’s, this drive was even more scenic.

We drive through the Valle Encantado (Enchanted Valley) the National Park, famous for its giant cactus forests, mountains and wildflowers. 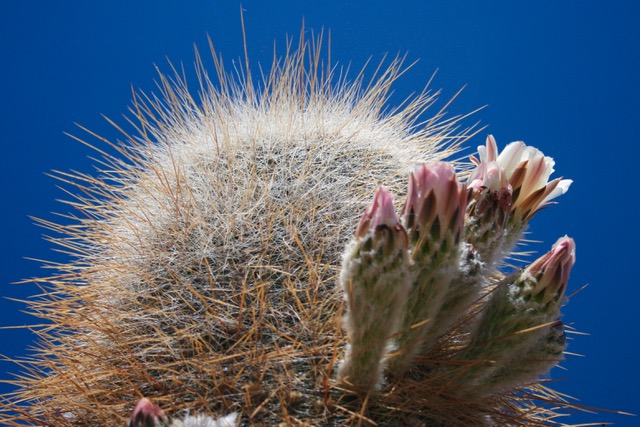 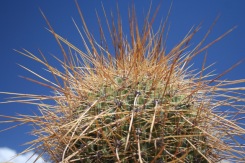 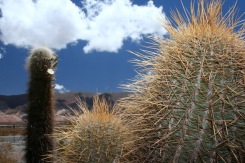 It is also known for the “Recta Tin Tin” – 10km of dead straight road (itself a relief  after all these days of driving around hairpin bends!). The road, due to the landscape, provides an optical illusion which makes it seem as though you are going uphill, but you are really going downhill – weird!

Alex from our B&B had told us that when we got here we should switch off the engine, take off the handbrake and feel the car roll “uphill”. We did and it was very weird!

Parque Nacional Los Cardones through which we are driving is full of the giant Cardon cactus, the symbol of Salta  Province which is seen just about everywhere . It takes us a long time to drive through the park as we are continually stopping to take photographs of the stunning landscapes.

These massive cacti go on for miles and as they spill down the mountainside they look like a little like soldiers on the march. How these huge plants – some are over 5m high – can cling and grow to nothing but rock is amazing. In places they seem as though they are perched on top of bare rock, holding the surface of the mountain in place.

Apparently they grow at a rate of 2mm or so a year and, given that some of them are 25m high, this must make them very, very old. occasionally we see one in flower, if ever they all flower at the same time it must make an incredible sight.

Once again the road winds up and around the mountains and gets quite high.  At the top of one pass there is a shrine to the patron saint of travellers (St Rafael), so we stop and light a candle inside. Seemed rude not to!

By late afternoon we arrive in Cachi, a very pretty village which is popular with Argentines for their holidays. We had heard about a Finca outside of town and set off to find it. The Finca La Paya was fully booked for that night but so nice that we decided to find a place in Cachi and stay there following night.

Cachi is quite small so after dumping our bags at the hostal we do a little exploring by wandering around the very pretty whitewashed square and surrounding streets. Looking up, we notice a large white building perched high on the hill above the town. We decide to take a drive up along the very narrow steep road to the top to see what the building is all about and to get some superb views of the town.

When we get there, we realise that it is the town cemetery and chapel. The posts all along the road showing Jesus in the various stages carrying his cross to the crucificion should really have given us a clue! 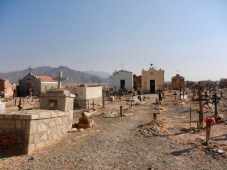 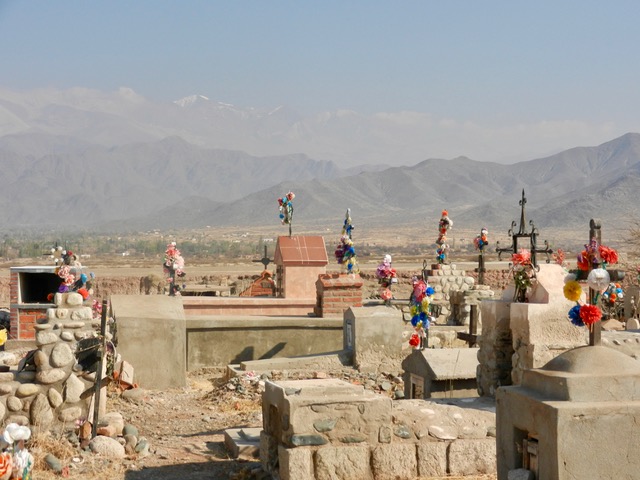 We wander through the cemetery and see the various elaborate tombs which, because  the hill is solid rock, have been built above ground. There must have been an earthquake at some point recently because some of the tombs were falling down and the coffins (and in many cases the contents!) were exposed to the elements. As we walked out to the edge of the cliff to take in the views we watched the eagles soring all around us – magnificent! 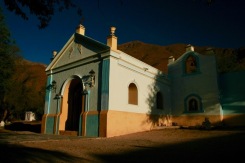 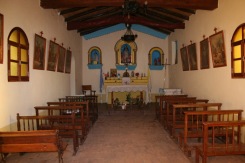 The next day we leave our place in Cachi and drive to Finca la Paya. The farmhouse dates back some 200 years. Built in the local style, but now much renovated to a boutique style hotel, with just 9 rooms. All the food  is produced on the farm. We had an excellent 3 course menu del dia which included Aubergines braised in Red Wine and Artichokes and a huge array of salads. This was followed by beef fillet, wrapped in bacon and served with a sweet potato puree. All delicious.

Our room was one of the best we have stayed in so far. Very rustic in style. The centrepiece being with a bed made out of solid rock!

The finca has quite extensive grounds lots of cacti and huge herds of goats and is own private chapel. 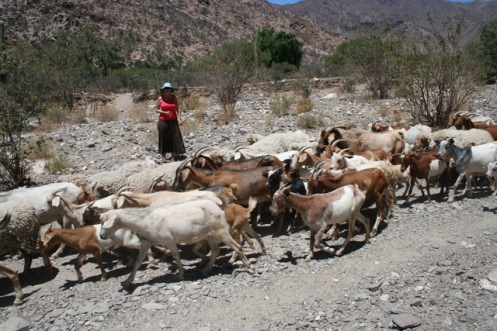 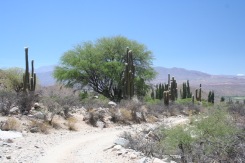 The family running the place (2 daughters and their father) were very good at ensuring everything was perfect and we thoroughly enjoyed our stay. The father was a real character and spoke very little English, but every time he saw Clive he gave him a slap on the back and said “Ah! The English boy! Boy?”

As iconic in Argentina much as Route 66 is in the USA. Many Argentines consider it a challenge to hike, bike, or motor bike the whole length (one day soon!) 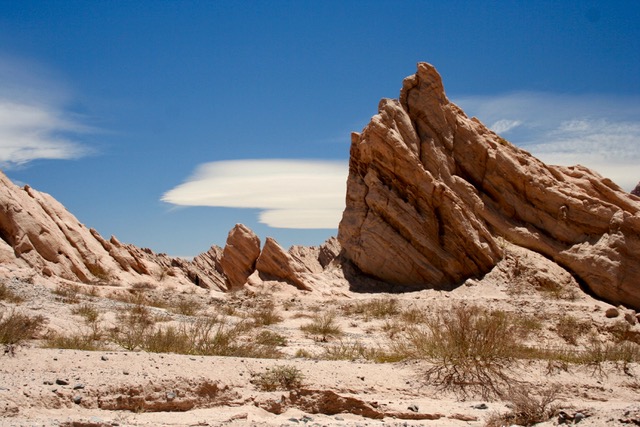 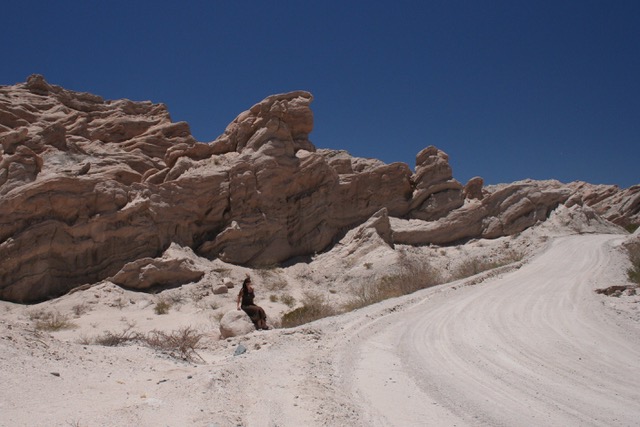 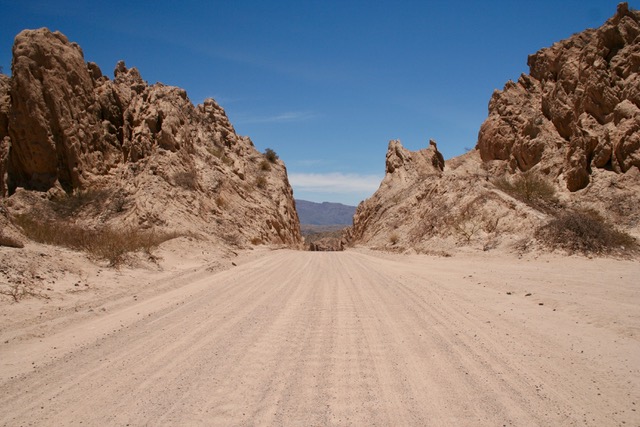 1. It is the longest road in Argentina at over 5000km/3000miles running from the Bolivian border to the southern tip of Argentina
2. It rises from sea level to over 5000 metres in places.
3. It crosses 18 national parks, 18 major rivers and connects 27 Andean passes.

Signs along the way show  how far you are from the end of the road and provide a reference point for those who live in the wilderness. I literally bought the tee shirt! 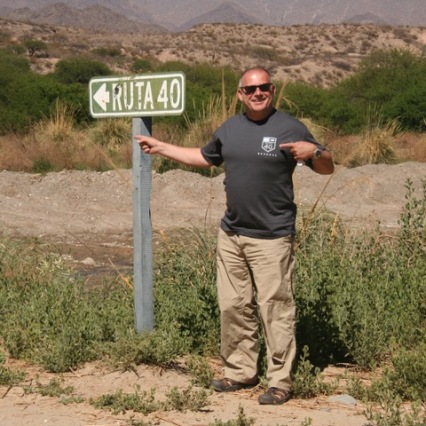 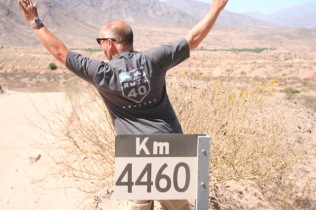 The road is mostly gravel and largely deserted. Driving along we see some wild desert foxes right by the road, a few high flying raptors, apart from those there wasn’t a lot of company.  The villages along the road are often just a couple of adobe homes and the people living in them, if we did see them were usually dozing under a tree!

We pulled into the quiet and stunning beautiful Molinos, noted for its adobe houses, a beautiful courtyard house of major historic interest (now a hotel). 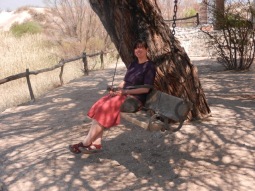 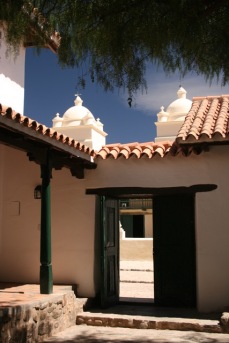 There is also the most stunning church we have seen on this continent. Again, we arrived at siesta time and the whole place was deserted. 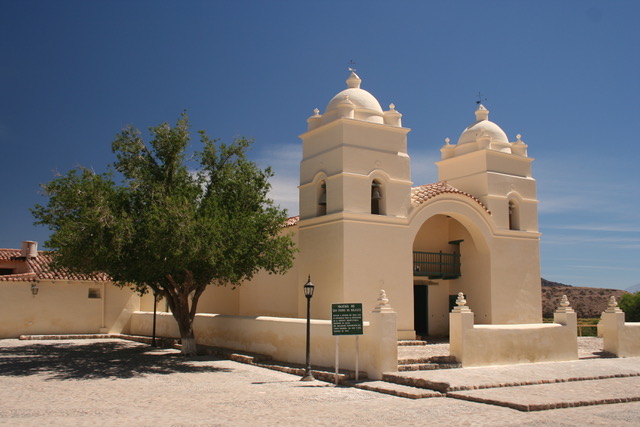 We thought we had seen every variation of rock and mountains known to man on this trip until we passed through the Quebrada de las Flechas ( the ravine of arrows) where the rocks have been formed by erosion into arrowhead shapes. 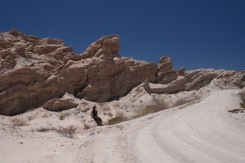 Along the way we spot a sign for a Mirador so we climb up to take in the views and take some photographs of this incredibly beautiful but barren landscape. Apparently this is  the area where parts of Star Wars – The Empire Strikes Back was filmed. 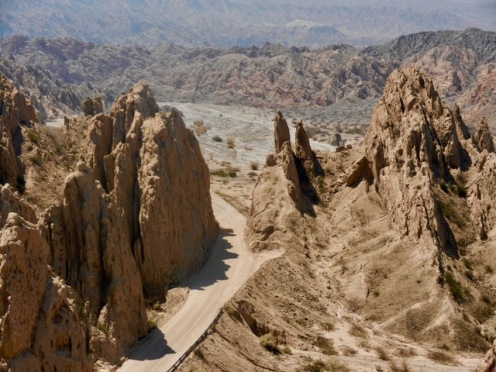 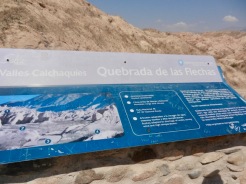 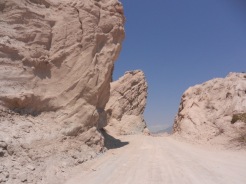 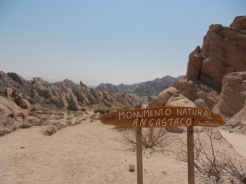 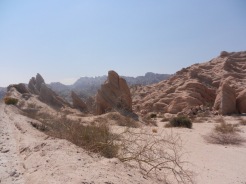 Again we see virtually no other people on this drive which makes one wonder what would happen if we did break down.