Northwest Argentina has some of the most dramatic and diverse landscapes in South America? Today is the first day of our ten day road trip around this beautiful region.

We have been staying a few days with Alex and Reijke at the wonderful Casa Hernandez in San Lorenzo, a few kilometres outside of Salta. 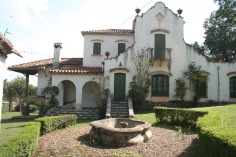 Salta itself is a pleasant city with a lot to see and do, a nice cathedral, fantastic restaurants, cable cars and a wonderful main plaza. 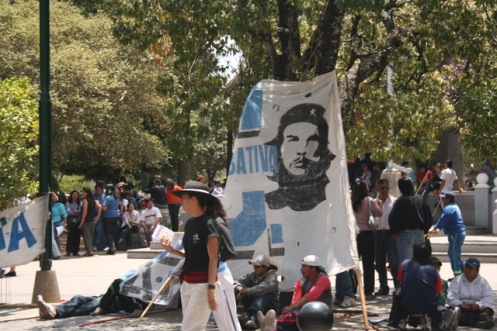 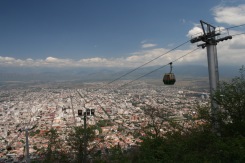 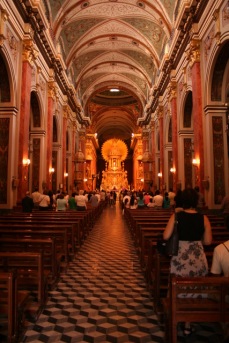 Armed with a small map and a large 27 page booklet ( all in Spanish) from the tourist office in Salta, we set off in the nice shiny black Renault Clio from Hertz had to offer that we are assured is up to the 10 day road trip we have planned – we will see!

Our somewhat vague plan is to combine two routes to the north and south of Salta, the “Circuito Norte” and the “Circuito de los Valles Calchaquies”.

As we head northwards through Jujuy province towards Huamhuaca, we wind through the green countryside seeing few other cars and see only a few traders at the roadside displaying their wares, usually blankets and ponchos.

Before long, the countryside turns from lush and green to dry and rocky. The villages become further apart and the road turns from smooth tarmac to compacted gravel. 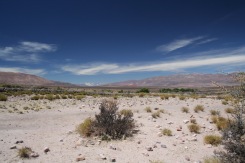 As we climb ever higher, the bends become tighter, the road narrower and rougher. There are no other cars around and it occurs to us that we may have got lost! But as there are no other roads so we assume that this must be the right way! 100km later it is a relief as the the road widens and reverts back to smooth tarmac. Phew!

In Jujuy, the provincial capital we search in vain for some lunch and some water. We soon realise that it is siesta time and the whole town is closed for the next 4 hours so we continue on to Tilcara which,  being geared towards tourism, is at least open for business. Ignoring the is over-priced craft market in the village square we grab some empanadas and water from a stall and continue our journey onwards to Humahuaca. 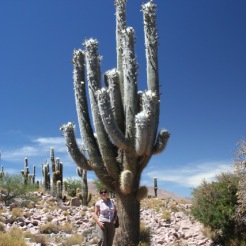 We drive along the Humahuaca Gorge, a high altitude valley with mountains on either side. On one side these mountains are muted, mellow colours and rounded tops, on the other, they are vividly coloured with sheer sides and pointed ridges. In the late afternoon sun the views are quite breathtaking. 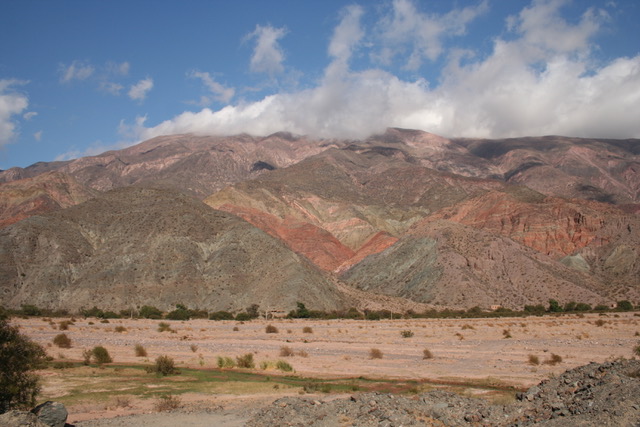 As we move on the mountains take on even more spectacular colours are the shape of oyster shells. As the sunlight hits the rock, the colours glow, reds, pinks, yellows and violets, almost like a rainbow. 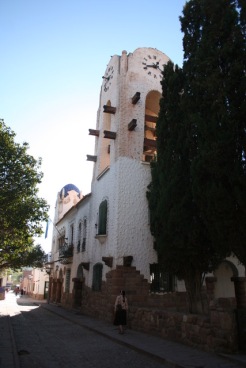 Reaching Humahuaca, the northern most point in the circuit, we spend the night in the lovely Hosteria Solar de la Quebrada.  Unexpectedly, we have one of the nicest but simplest breakfasts we have had in Argentina. Breakfasts here seem mostly to consist of of stale bread, butter and jam. Here we have fresh strong coffee, freshly squeezed orange juice, fresh bread, cheese and fresh fruit. A real delight! The village itself has a pretty plaza which we see first in the dark as we stroll around town looking for a place to have dinner.

Next day we head off to find some Inca ruins about 9 kms north of the village. No road here, just a track of dust and stones. Soon we are in the desert wilderness and the track swiftly deteriorates and we are just driving between the bigger rocks and suddenly disappears completely. I am beginning to think that the small, cheap Renault Clio was not a great idea and that a big 4WD or even a Humvee may have been a more sensible choice!

We find ourselves in the middle of a football pitch. I say pitch, there are two sets of goal posts and less rocks than elsewhere in the immediate vicinity! We have been driving for perhaps 45 minutes and have not seen more than 3 adobe homes in the distance, so where do the players come from?

We get out of the car here and see a stone wall around a patch of land that some poor soul has been trying to cultivate. We later find out the wall was, in fact, the inca remains we had come so far to see.

Still on the same road since we left Salta, on the way back to the south we cross for the second time, the Tropic of Capricorn. Carolyn is a Capricorn so it is essential to have a photo of her taken at the spot marked by a massive sundial monument which marks the exact point of the tropic. Bizarrely, the whole area seems to be populated by goats!

Stopping briefly once again in Tilcara for lunch, we then take the one turning off of the road we have been travelling along for the past 3 days and head towards Purmamarca. 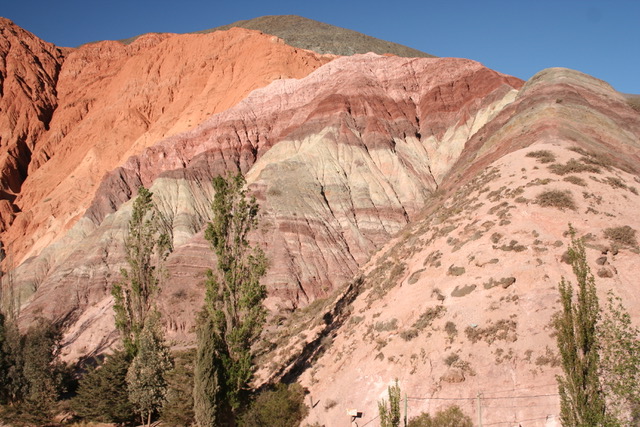 Nestling at the foot of the “Cerro de los Siete Colores” (Hill of the 7 colours), Purmamarca is another village geared up for visitors with the usual places to eat, sleep and drink and the obligatory, overpriced craft market in the village plaza. 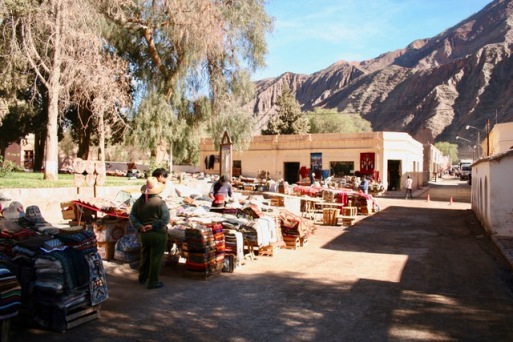 A lot of the restaurants and hostals were closed, maybe it was too early in the season? Those that were open were pretty dire and overpriced (tour bus country!).

We found somewhere reasonable for the night as we wanted to stay overnight to catch the morning sunlight on the hills.

The overnight stay was definitely worthwhile as the hills were beautiful, but tricky to photograph as they were so big and so close to the village. We went for a walk close to the hills in the early morning but the best shots seem to be from further away on the road out of town.