Some 40kms southwest of Hoi An, it was a pleasant drive to My Son. We followed the river and drove alongside the rice paddies. The small towns and villages we passed through were home to lots of foundries producing the ceremonial brass gongs for use all over Vietnam. The other main industry in many of the villages was the production of rice paper. The roads were lined with rice paper drying on racks in the sun. This area is famed for its rice paper; apparently the water makes it taste particularly good and Hoi An cuisine requires a LOT of rice paper!

My Son is set in a lushly wooded valley overlooked by “Cat’s Tooth Mountain”. A calm and pleasant respite from the mayhem that is the Hoi An of today.

We assumed that most people would visit My Son on a group bus tour which would make the site very crowded and so we decided to hire a car and driver to leave early and avoid the crowds and the worst of the heat. Most group tours seem to leave Hoi An at around 8-9am, so we arranged our car 07.30am so we at least stood a chance of avoiding the crowds. It worked!

There are “dawn tours” available but apparently you don’t get there at dawn??? 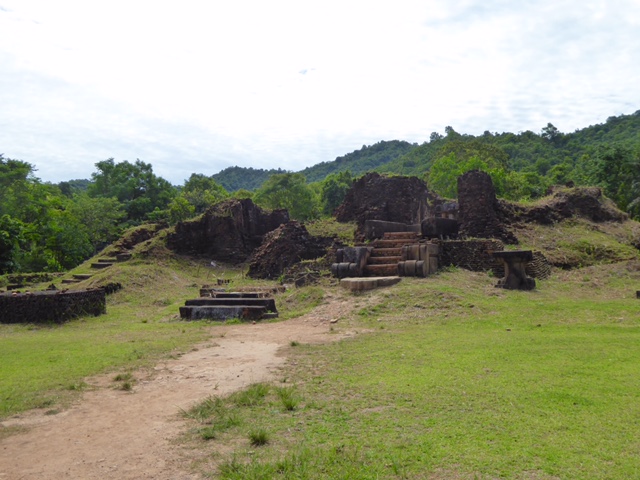 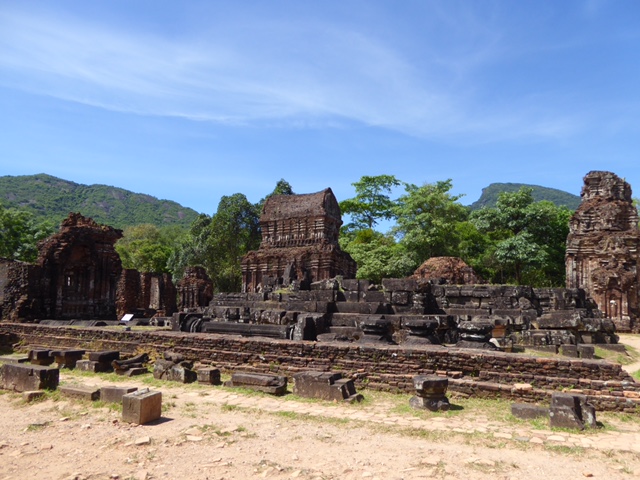 The pleasant drive along the river, through rice paddies and a few small towns took around an hour and we arrived at the site, purchased our 150k Dong tickets and jumped into the waiting giant golf buggy that would whisk us along the 2 kms to the site entrance.

To our dismay, a tour group had got there just before us! Fortunately, for some reason, they decided to set off along the paths in the opposite direction to the direction arrows! A major result as we had most of the site to ourselves for most of the time. Only when we were leaving, did the tour buses start to arrive. 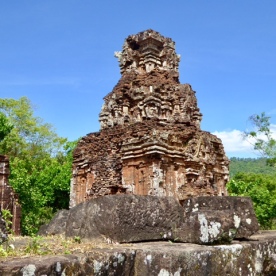 My Son was once the most important intellectual and religious centre of the kingdom of Champa. Continuously occupied from the 4th to the 13th century it is not in good shape, partly because of general decay of the centuries, but also because of bombing by the Americans which destroyed large areas of the site. Only around 20 of the original 68 buildings still stand. Those ruins that do remain, are nicely situated in the woods, alongside streams accompanied by the racket of frogs and cicadas. 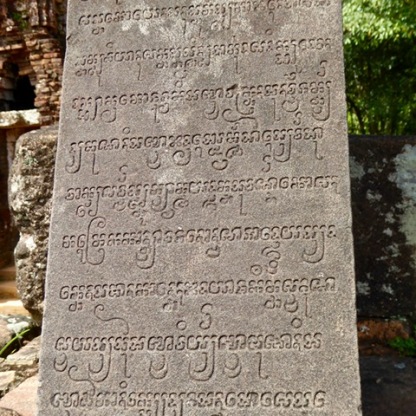 The building were largely constructed of brick and seemed very similar to some of the sites in Angkor, Cambodia. 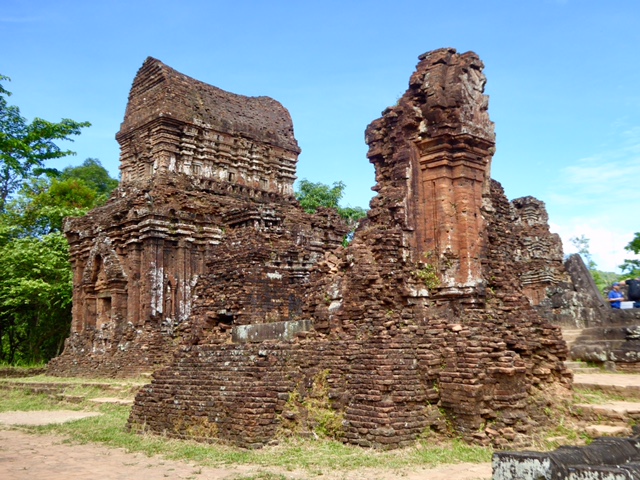 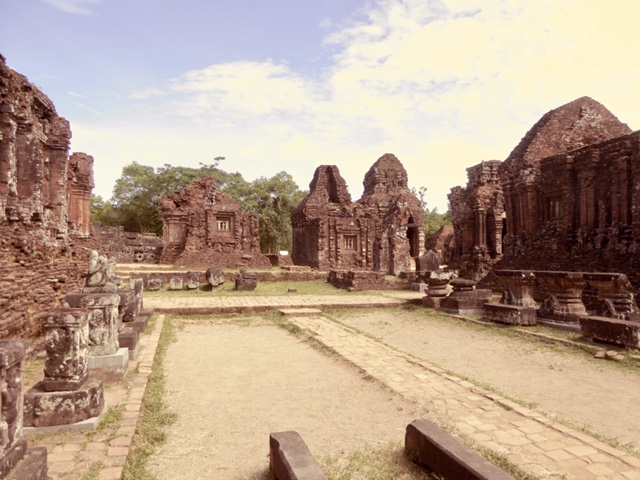 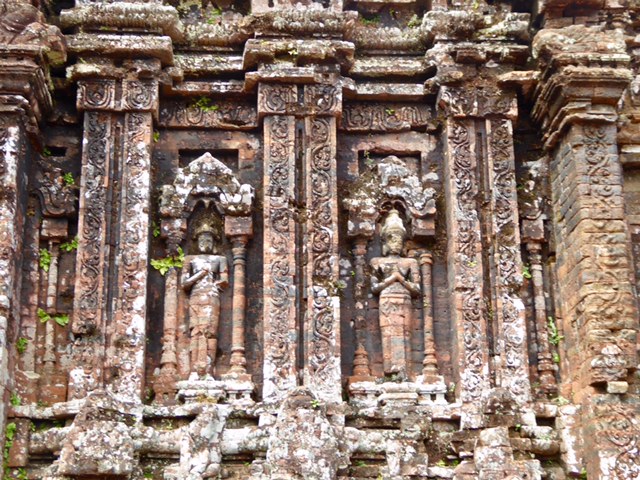 The various sections of the site are grouped A to F. Unfortunately, the signage is next to non existent so take a guidebook with you if your require detailed information 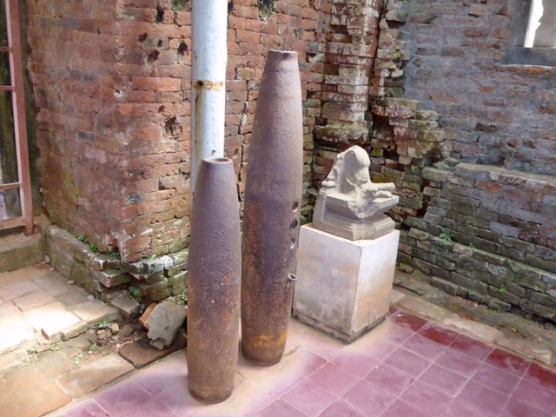 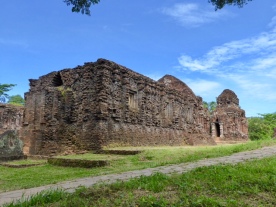 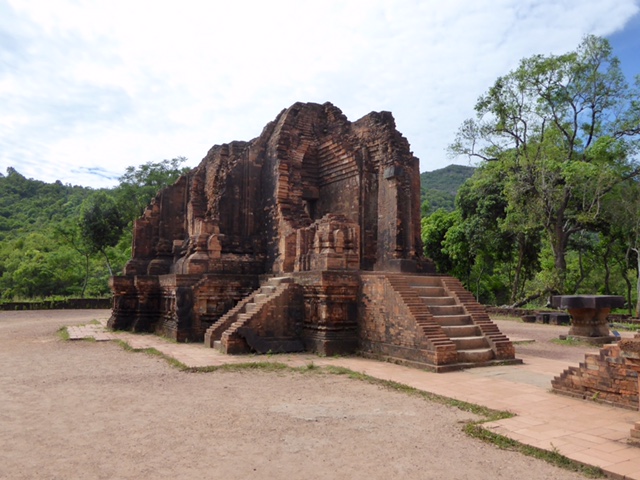 On the way back to Hoi An we stopped off at Tra Kieu to visit the modern Mountain Church atop Buu Chau Hill – great views of the surrounding countryside and Tra Kieu Church. 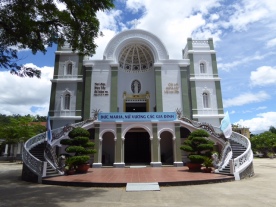 A group tour costs from $5-8 per person and usually lasts around 7 hours – longer in part due to pick up and drop off at various hotels.

Some tours have the option of switching to a boat for the last part of the journey back to Hoi An. We didn’t do that,  but I imagine it would be quite a nice way to finish off the day.

Literally anyone in Hoi An will arrange a tour. Tour agents, hotels, taxi drivers, bars…

Driving in along from Da Nang train station to Hoi An it is easy to see why the town has become so busy. We were quite shocked by the sheer scale of development which had taken place since our last visit two years ago. Driving for maybe 20-30kms from Da Nang along the coast road, we saw nothing but new hotels and building sites for new yet more hotels,  lining the road ( and these are REALLY big hotels!) I cannot comprehend how Hoi And will cope with the tens or maybe hundreds of thousands of additional tourists that this new accomodation will bring. Such is progress, I suppose. 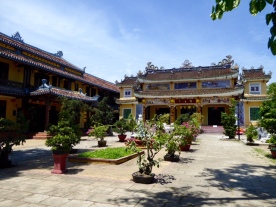 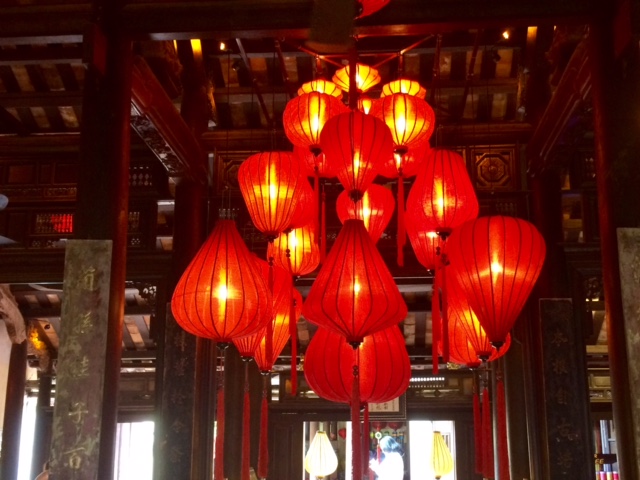 Whilst still very quaint and picturesque, it is indisputably now a very, very busy place. The town now sees around 1.6 million visitors a year, making it by far the busiest tourist site in the country. During the few days we were there it was the Vietnamese school holidays. It seemed as though most of the country had decided to come as well as large numbers of Korean tourists.

It was extremely busy  in the mornings as the tour buses from Da Nang arrived and gets even busier in the evenings!

Either side of noon it was very, very quiet. But, as Noel Coward wrote; “Only mad dogs and Englishmen go out in the noonday sun”