Known as “The White City”Arequipa is one of our favourite cities in South America.

Arequipa is located at an altitude of 2325 m in the desert mountains of the Andes. This beautiful city is practically completly built out of sillar, a kind of white stone.

This time we were travelling with friends from England who had wanted to see the best that Peru has to offer.  An added bonus was that the altitude would enable them to acclimatise gradually for what was to follow! This was our third visit and our third attempt to visit the Colca Canyon, near Arequipa. Twice previously  we had to cancel travelling into the canyon because of earthquakes, a common occurrence in this part of the world.

Arriving in the early morning after 15 hours on the overnight Cruz del Sur bus from Lima, we headed to the taxi counter to get a taxi to our hostal. Chatting to the taxi lady, she told me that the Colca Canyon had been closed off due to an earthquake that morning. Not again!  We have a couple of days in Arequipa first, so we keep our fingers crossed all will be OK by the time we head off. 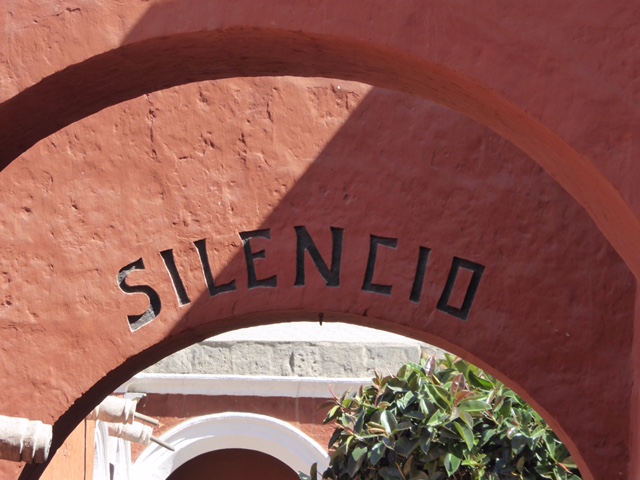 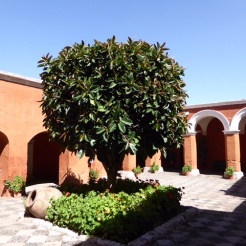 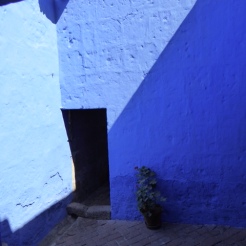 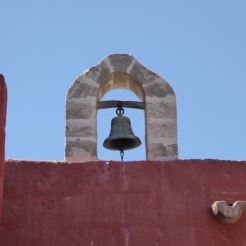 The convent occupies a whole block which was conveniently just a round the corner from our hostal. Guarded by imposing walls, it is one of the most fascinating sights in Peru. Founded in 1580 by a very rich widow, Doña María de Guzmán, it spreads over some 20,000 square metres, almost a city within the city.

This time we decided to hire a guide for the four of us (cost S20) from just inside the entrance. The tours lasted about an hour, after which we wandered around by ourselves. For once, the guide was well worth her money – very informative. The monastery is also open a couple of evenings a week enabling visitors to wander through the grounds by candlelight. Tempted to go back but we just didn’t have the time

Passing under the Silencio arch we entered the Novice Cloister, a courtyard with a rubber tree at its centre. After passing under this arch the novice nuns were required to begin observing their vows of solemn silence and commence their life of work and prayer. The nuns lived as novices for four years, during which time their families were had to pay a dowry of 100 gold coins per year. After the four years were up, they could chose between taking their final vows and entering into religious service, or leaving which, most likely would have heaped shame upon their families. 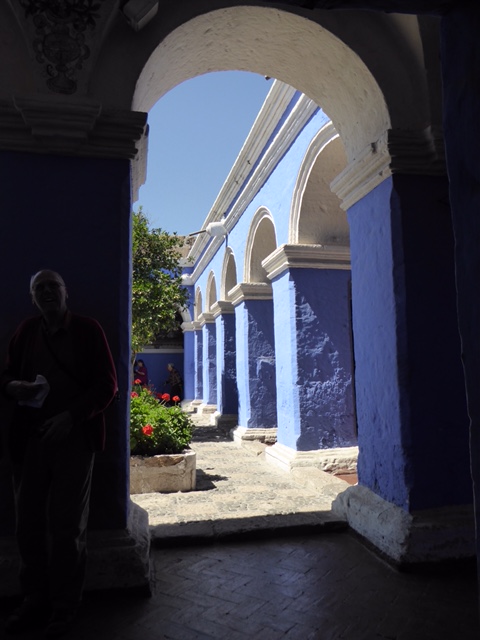 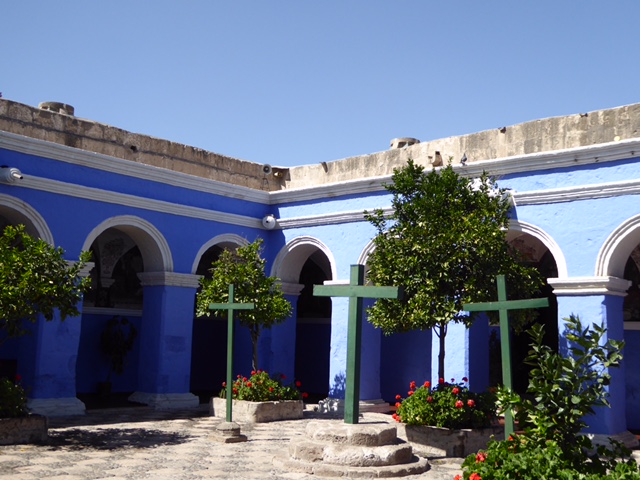 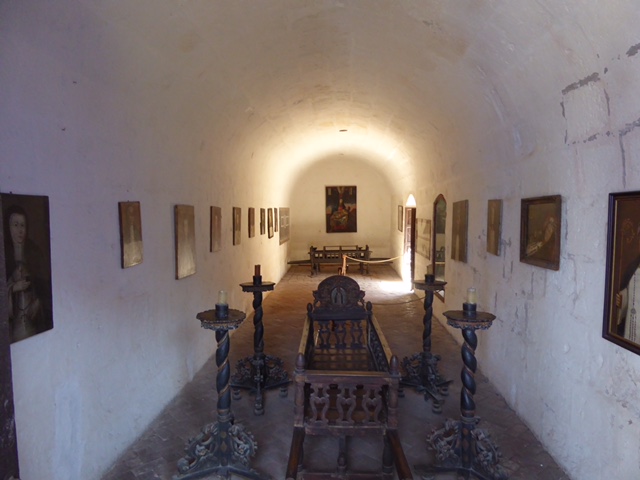 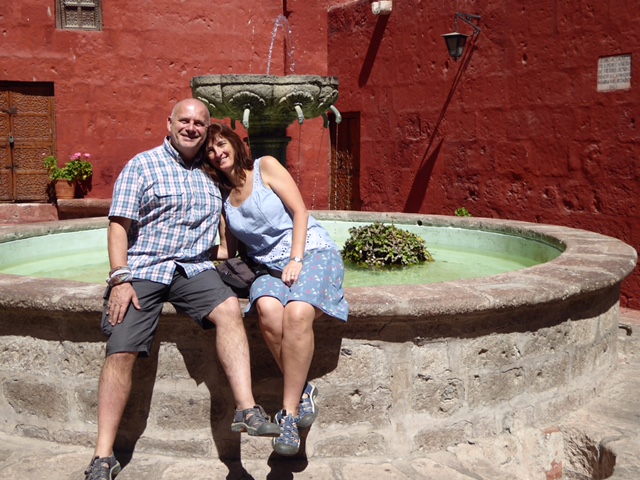 The whole of the convent is superbly decorated, mostly in bright colours and brilliant white. Lots of trees, bushes, fountains in the many streets and cloisters. Far from living in poverty, it seems that at least the nuns from richer families enjoyed a life of comparative luxury.

On return to the entrance we stopped at one building to climb the stairs to the roof to gain the most amazing views of El Misti, the perfect cone shaped volcano that over looks the city.

As with most towns and cities in South America, the Plaza de Armas is where it all happens. The cathedral on the Plaza is one of the most beautiful anywhere on the continent. The markets are vibrant and full of great produce and are decent places to grab a bite to eat. 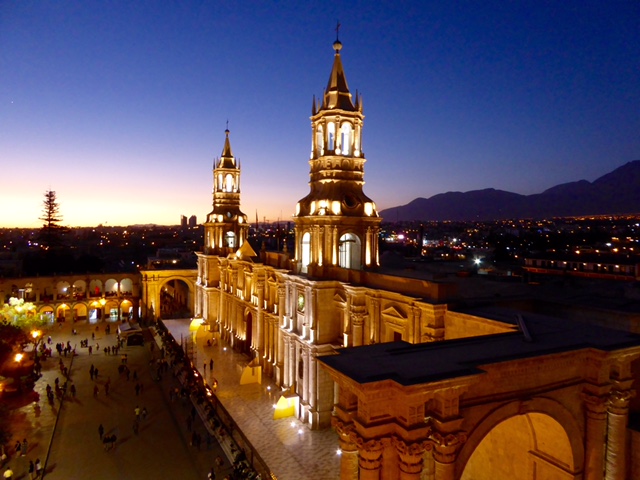 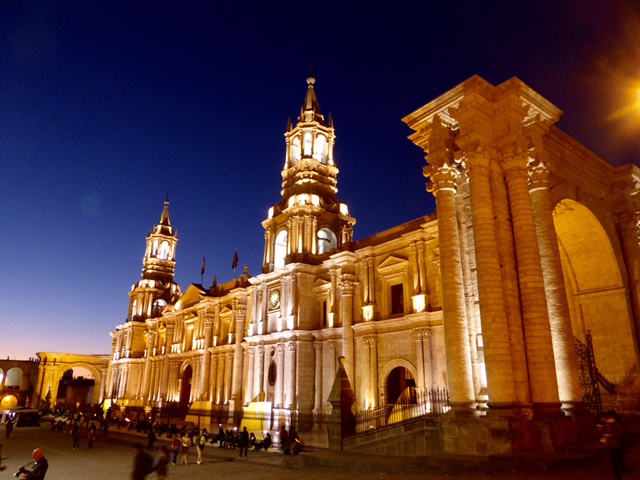 We have spent a fair amount of time in Arequipa over the years and every time the Plaza has been a riot of colour due to the fiestas and parades that seem to be a permanent feature of life here – apart from this time! Never mind, here are a few photos of parades from our previous visits. 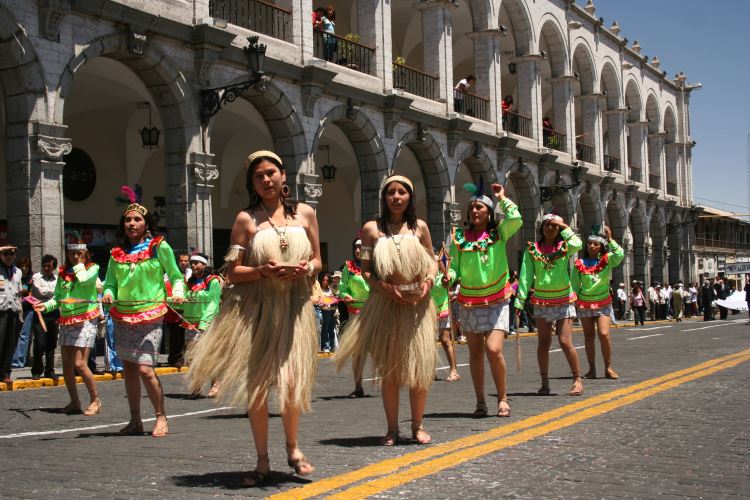 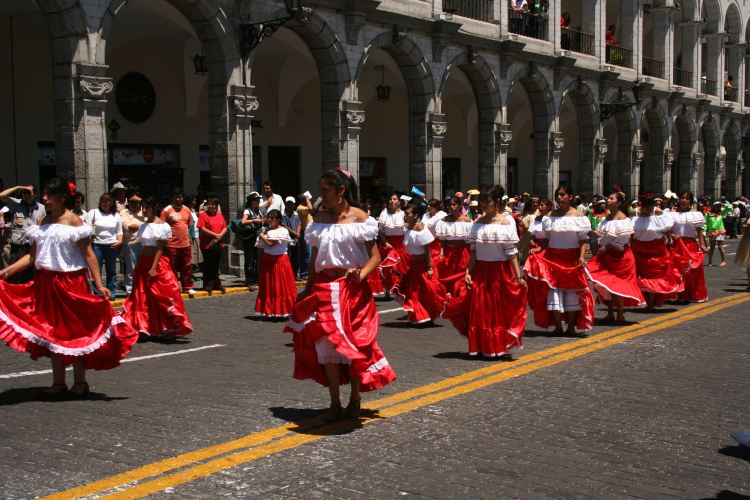 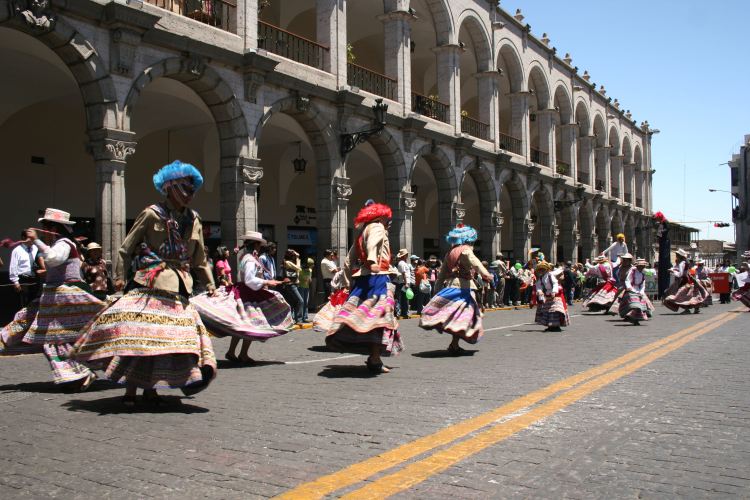 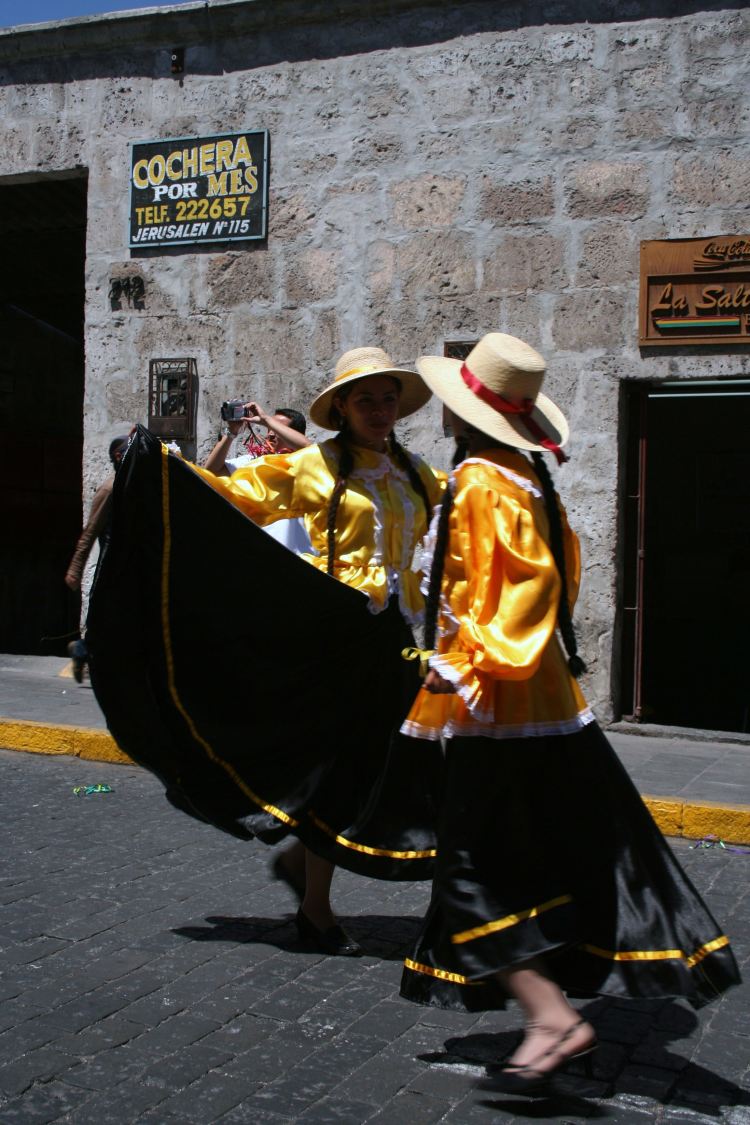 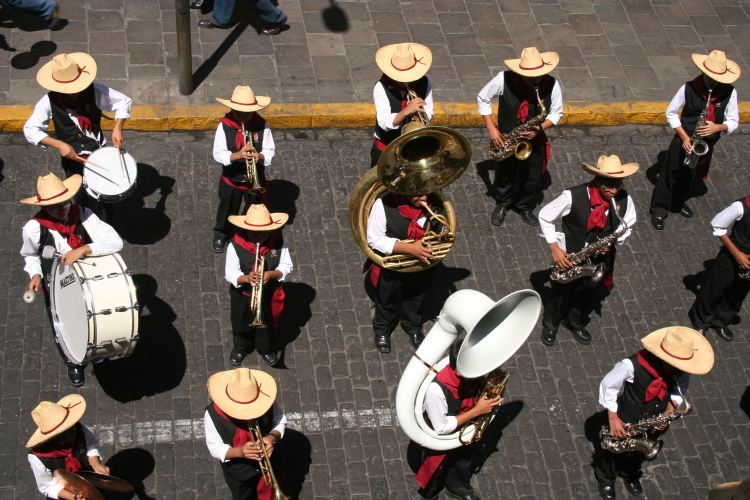 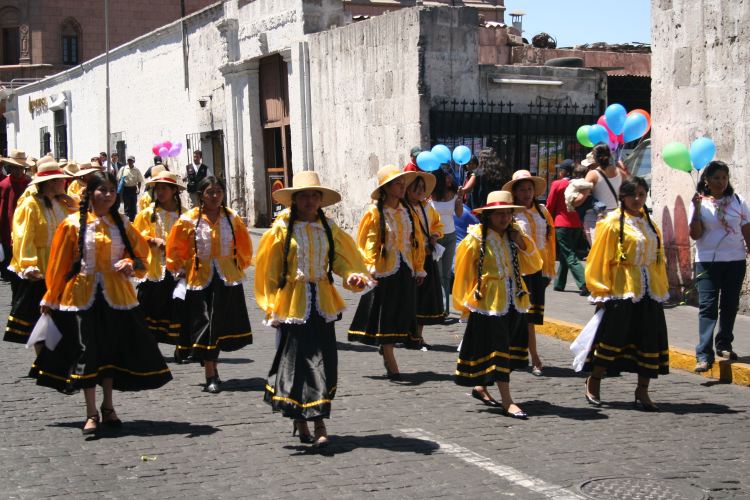 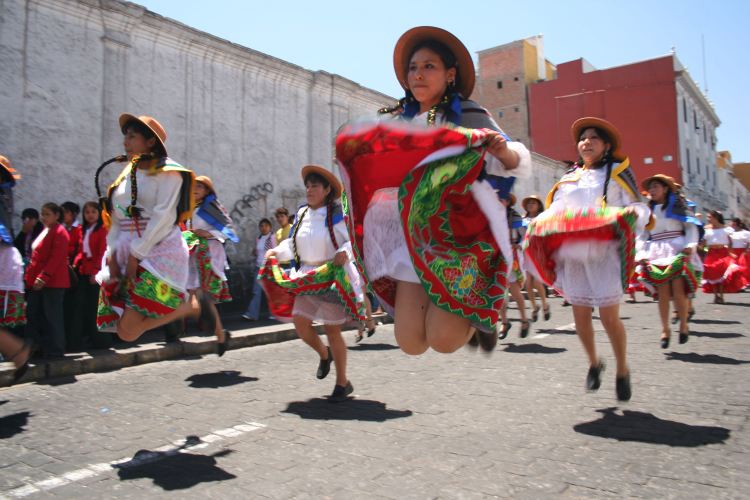 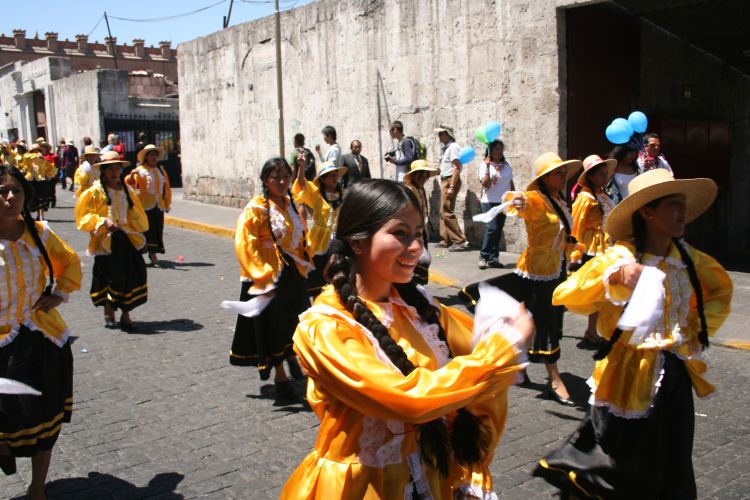 Always a dilemma to know whether it is better to visit a place so shortly after a disaster. On balance, we felt that as tourism was so important to the area, we would carry on as planned, if we could. I eventually managed to contact Killawasi Lodge where we were due to stay and they confirmed that whilst the village (Yanque) had been badly hit by the quake, they were still operational and please could we still come as the area badly needed the flow of tourist dollars to help with the reconstruction.

At last we get to visit the canyon!!