Dawn was breaking as we arrived in Cuenca after ten hours on the bus from Piura in Peru.
It was pouring with rain, my back was killing me, I was tired and generally not a happy bunny! We joined the taxi queue of a dozen or more people waiting in the torrential rain, only to see the locals completely ignoring it. They were hijacking taxis approaching the rank and swarming over any taxi that put in an appearance before it had a chance to reach the taxi rank. This really annoyed one Peruvian guy who started remonstrating with the culprits – to absolutely no effect!

After awhile, I suggested to the fellow Englishman standing in front of me that we needed to forget our polite, English queuing conventions and adopt the “when in Rome” approach. We acquired the next taxi to arrive, virtually by force! The driver seemed amused to see gringos behaving in such a way, but hey, I was hungry, tired and wet and not at my best!

Based on the advice of a lady in Washington DC whom I have never met, but correspond with regularly on the Fodors Travel forums, we had decided to stay at Casa Montavalo Bed &Breakfast. Arriving at the ridiculously early hour of 07.00am, we were greeted by the owner, Sonia, still in her dressing gown, but who was kind enough to let us in and showed us to our room for a few hours, much needed sleep.

Sonia is a great host and a talented artist who has incorporated some great design ideas into restoring this old colonial building. It is walking distance to the main plaza but in a quiet side street making for a peaceful nights sleep. It really is a great place to stay in Cuenca.

A minor, problem arose on out last night when, at 03.00am, one of the men rolled in very drunk, crying and shouting that he had lost his iPhone. He managed to wake everyone in the building. I suggested to him, non too politely, that no one cared about his phone and he should go to bed. After a few more words from the owner, he did go to bed. At breakfast a few hours later, surprise, surprise he was all smiles, phone in hand! I was sorely tempted to shove it where he would never lose it again!

Cuenca was much the same as we remembered from our last trip except there seemed to be far fewer gringos around. Perhaps a result of the recent earthquake?

We had intended to do some hiking to Ingapirca, the inca ruins a couple of hours outside of the city and to Parque Nacional de Cajas, but the weather and my “bus journey back”, conspired against us. So instead, we spent our time rediscovering the beautiful colonial centre of the city. 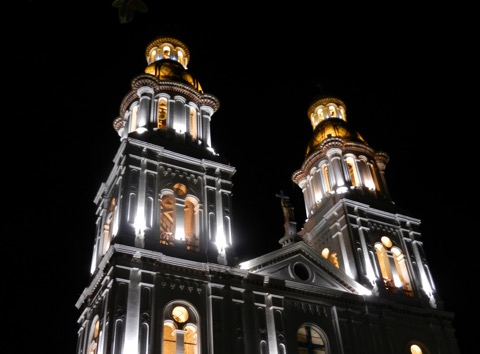 Our visit coincided with the festival of “Corpus Christi”, a national holiday, so there were lots of celebrations going on – bands, parades and street food stalls were everywhere and, over the weekend, a massive chocolate and sweetie festival. Never have I seen seen so much chocolate or so many doughnuts in any one place,  my Mother in Law would have been in seventh heaven! There must be a sugar shortage somewhere in the world and possibly a diabetes crisis in southern Ecuador! 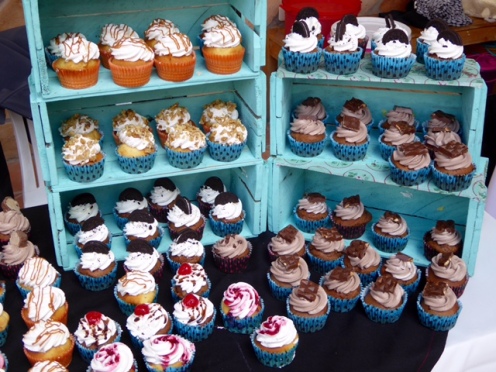 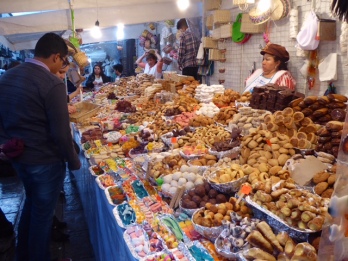 Apart, apparently from the chocolate, the main reason most people seem to come to Cuenca is for its stunning colonial architecture, which is everywhere in the Centro Historico. So many gorgeous buildings most with balconies, many decked out with flowers.

Towering over it all is the stunning, blue-domed Catedral de la Inmaculada Concepción, commonly referred to as the New Cathedral of Cuenca. 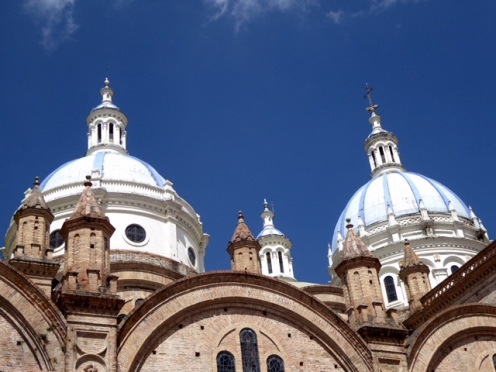 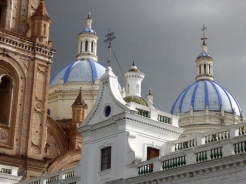 It is alleged that when it was first built, 9,000 of Cuencas 10,000 inhabitants could fit inside!

The front facade is built of local marble and alabaster, inside the floor is of imported Italian marble. A truly stunning building! 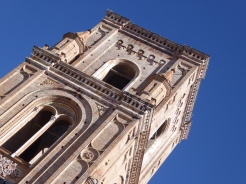 Cuenca has a lots of great foodie options, even if some of them are aimed squarely at the tourist and expat markets. Our favourites included: 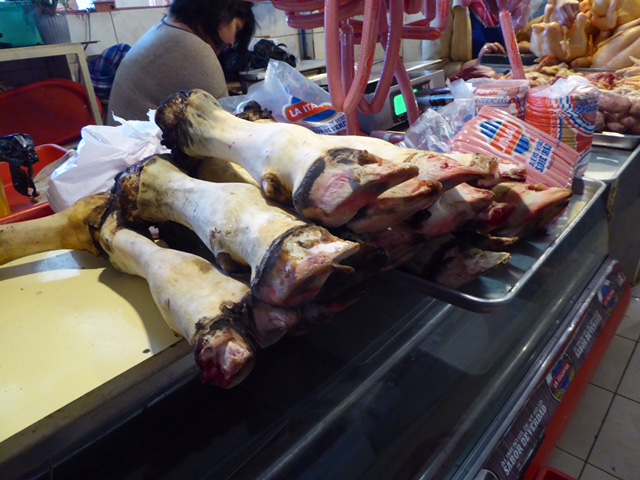 Molienda Cafe for its Colombian arepas ( an old favourite) .

Black Angus – across the river, has superb burgers, ribs and steaks.

There are also endless smaller places serving up delicious almuerzos – set lunches usually around $3, for which you get a soup, a main course and a drink. Great value and good food. The courtyard of one of our favourite places. 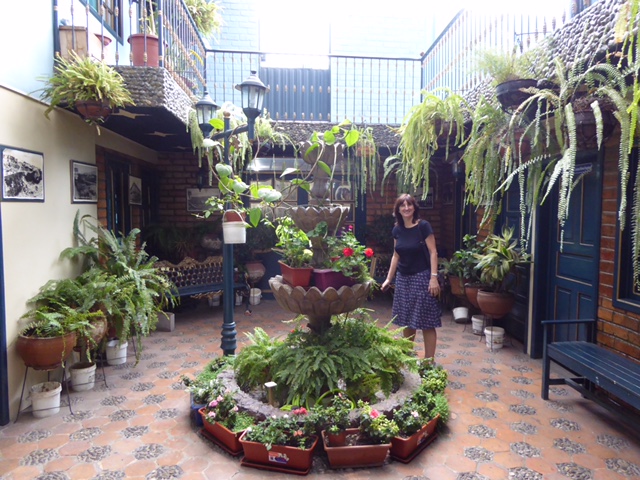 We popped in on a Friday for their $2.50 pensioner’s special. A bargain!

Our most enjoyable evening was spent at La Vina Pizzeria. We walked by this place purely by chance and noticed a sign advertising live jazz. Too good an opportunity to miss, so we returned that evening. The pizzas were nice enough, but the main reason for going was for the Jazz Cafe upstairs. Run by an American expat, who set up the Jazz Society of Ecuador. He is, himself a talented pianist and he took the time to greet us and explained what would be happening and who would be playing etc.

He accompanied a trio of players from Spain, Ecuador and Colombia all of whose who were very talented musicians. However, it was an Argentine guitarist/singer who stole the show with some amazing guitar work and a mixture of jazz and argentine folk music. A great evening and well worth the $5 voluntary contribution to the society.

Apart from the colonial buildings, the food and now jazz, Cuenca is also famed as the originator of the Panama hat. Apparently so named, because President Roosevelt first wore one on a trip to Panama – NOT because it was invented in Panama! As we walked right by the Panama hat museum and shop, it seemed rude not to pop in and try a few on. 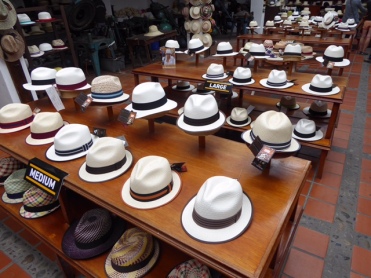 Doors seem to be an art form in their own right in Cuenca. A few examples: 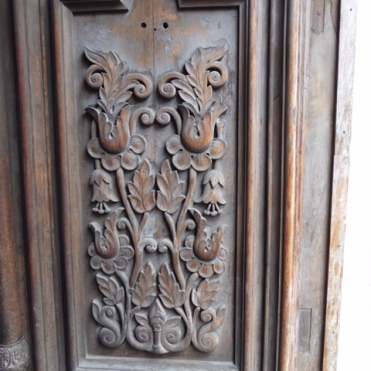 Like many places throughout South America, Cuenca seems to have caught the graffiti bug: 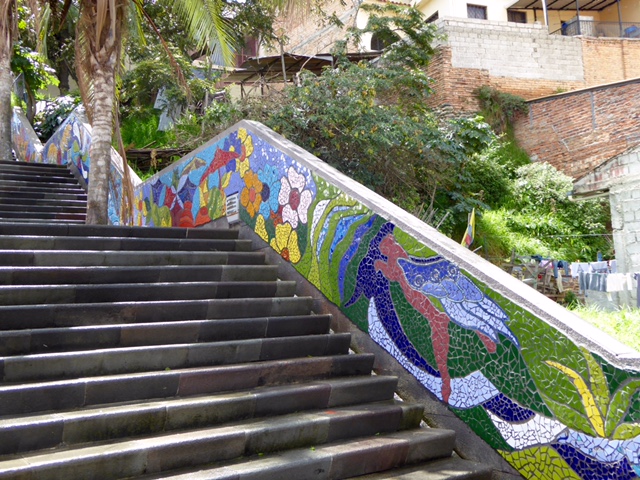 Sadly, this time we didn’t make it to Cajas National Park. But if you are into hiking, I would definitely recommend a visit. Here are a few taster photos from our last trip. 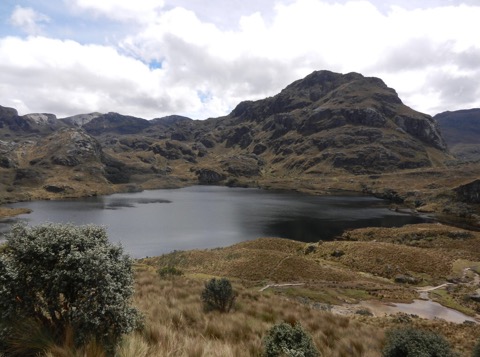