We knew Korea would be different, but how different? We had expected Korea to be a lot like Japan but they really are very different and Korea is a world apart from South East Asia.  The people seem a lot less reserved and more open than the Japanese and everywhere seems just a little less organised.

Arrriving in the early morning after an overnight flight from Bangkok, we hopped on the airport bus with instructions to get off at Jongjo 3 subway station. The information desk at the airport assured that from there it was an easy 5 min walk to our hotel in Insadong. All sounded all pretty straightforward.

The bus announcements were in English and Korean but we were tired after the overnight flight and Carolyn, who is normally responsible for all things navigational, had picked up some sort of virus along the way and was feeling terrible, so I was in charge of finding our way to the hotel. Big mistake!  Despite all the travelling we do, I really do not have a great sense of direction. Holding  the map upside down didn’t help much as we ended up walking in totally the wrong direction! After several attempts we eventually found someone who spoke English and who pointed us in the right direction where we eventually found our hotel.

Seoul is a huge metropolis of some 10 million people and so choosing the right location is key to getting around. Thankfully, Insadong turned out to be agreat area in which to stay. It is in centre of the city and close to the main subway lines making it very easy to get around town. It is also within walking distance of many of the major palaces. An added bonus were the hundreds of restaurants are right on our doorstep – almost too many to choose from.

Despite its size! getting around the city proved surprisingly easy once we get to grips with the subway system and maps – see above!

After catching up on some sleep we set off in search of dinner.  Insadong is an area of small alleys, brightly lit neon streets and a multitude of eating places. The choice is bewildering, partly because most of the signs are in the Korean script and partly because, with the exception of the ubiquitous kimchee, we have virtually no knowledge of Korean food! Even the kimchee seems to come in 101 different varieties – amazing the number of ways you can find to pickle a cabbage!

Just follow the steam and the smell for delicious dumplings! 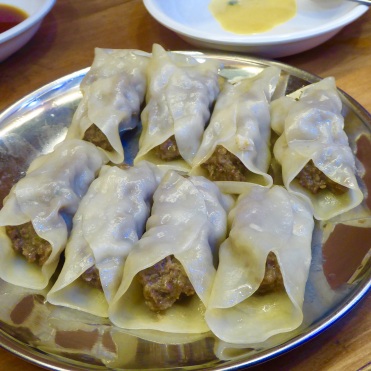 We stumble across one place which is brightly lit and billowing steam. There are photos of the dumplings they sell adorning the walls and they have English translations! It makes for an easy choice! We order a variety of dumplings, steamed and fried with different fillings of pork, prawn and vegetables and settle down at the counter to eat our fill. Different and much larger than the Chinese Dim  Sum to which they bear some resemblance and arguably, far superior. Are these the best dumplings ever? Quite possibly. As with all Korean food, our dumplings accompanied by various kimchi and a red pepper paste both delicious and varying from quite spicy to mind-blowingly hot.

We spend a lot of time just wandering around the markets of the countries we visit. It’s a great way to get a feel for a place, to meet the people and to gain some sort of understanding of the food. We spend the morning in Namdaemun Market entering by the Sungnymun Gate which is also known as “Korea’sTreasure No. 1” – really?  The market sells all manner of household goods and clothes and is heaving with people. At one makeshift stall in the middle of the street there is a virtual scrum going on around one guy who is is selling pure silk scarfs at knock down prices. People are walking away with armfuls of them. After an hour or two of negotiating the maze of streets we walk into a tiny alley of food stalls in search of lunch.

All the stalls are offering fish in of one sort or another. Whilst pondering which of the places to grace with our custom, our decision is made for us as we virtually get dragged into one by a tiny, but formidable old lady. She brusquely moves a few of her customers around just to accommodate us (she even tells a couple to leave as they have finished!). She tells us what to order – who would dare argue? We await our food with no real idea of what will arrive. Before too long our table is covered with lots of small dishes are including soup, dumplings, fried mackerel, kimchee and several indeterminate side dishes. All delicious and all for 16k won ($14).

This is the largest and most majestic of the five palaces surviving in Seoul. We have visited many, many palaces, places of worship, etc. around the world but this has to be the largest. As we enter through Gwanghwamun, the southern gate, our first impression is how much open space there is right in the middle of one of the largest, most expensive cities in Asia.

Once past the very colourfully attired guards we are treated to our first sight of Geunjeongjeon, the hugely impressive throne room. Only once we are inside the complex are we able to appreciate its full size – i.e. massive. The palace seems to go on forever – allow at least half a day to explore properly. Originally built some 500 years ago it has added to, and has been restored many times. 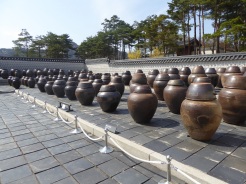 There lots of buildings, nooks and crannies to explore as well as two rather good museums which provide a great insight into Korean history and culture. The gardens around the palace grounds seem very Japanese in style and are very beautiful. Thankfully we visited on one of the few days of blues skies and sunny weather we were to have during our two weeks in the country and the cherry trees are in blossom! 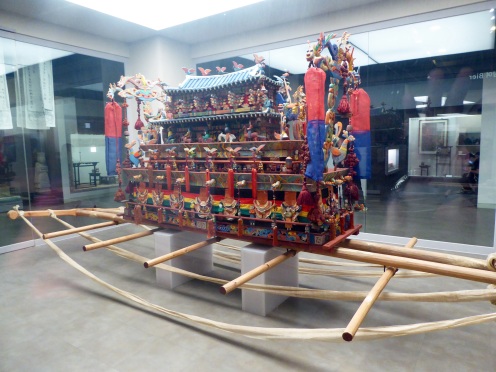 Close to Gyeongbokgung Palace is Bukchon Hanok Village an area on a hillside packed with around 900 Hanoks (traditional Korean houses). The area is used a lot in films as a setting for the old Korea, but is still very much a residential area. 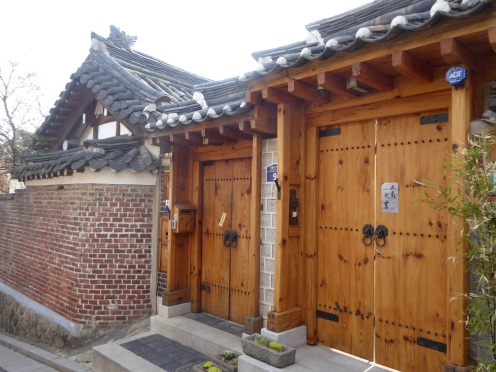 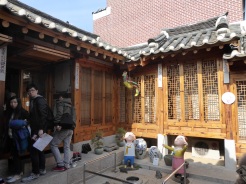 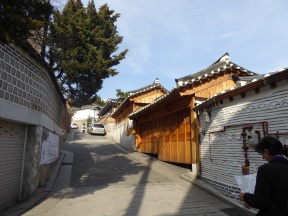 It is a great place to just wander around and as we ascend to the top of the hill there are some great views of the city.

Seoul is a fascinating town and we did consider spending a few more days here wishing that we had allocated more time to Korea. But tomorrow we head off for a day trip out of the city to the DMZ…