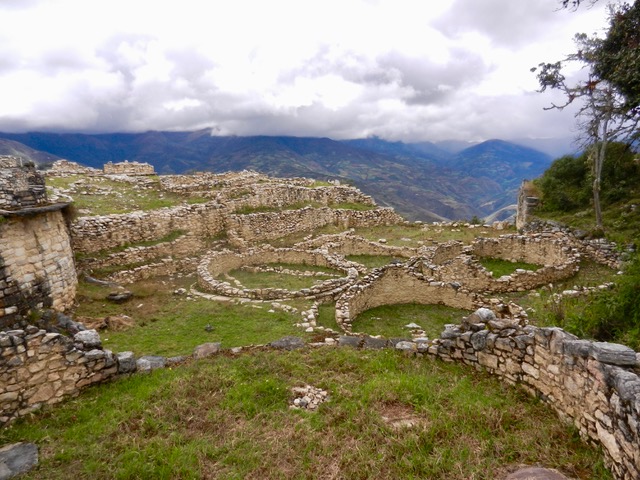 It took us three days to travel down from Vilcabamba in Ecuador to the mountain town of Chachapoyas in Northern Peru famed for Kuelap, the mountain top fortress of the Chachapoya civilisation.
This has certainly been one of the more arduous journeys we have taken on our travels. It has taken us three days to travel down from Ecuador. Landslides, rivers flooding road, missing border guards and a taxi driver who decided to drive us into a dark back street to “re-negotiate” his fare. The icing of this travel cake was to get held up by a dead and very rotten donkey blocking the road. but that is a story for another post!

On arrival in Chachapoyas I leave Carolyn in the Plaza with our bags to go off in search of a hotel for the next few days.

I found us a nice place (we deserve it after such a hellish three days!), we dump our bags there and trawl around the tour guides in the main plaza. The guide books recommend Hostal Revash. It seems o.k. but the owner was very pushy which is a big turn off for me, so we checked out some  others and before settling on Jose from Chachapoyas Backpackers. A really nice guy with an encyclopaedic knowledge of the Chachapoyas area, culture and people. He was actively involved in the archaeological projects at Kuelap and his enthusiasm, knowledge and pride in his culture is infectious. 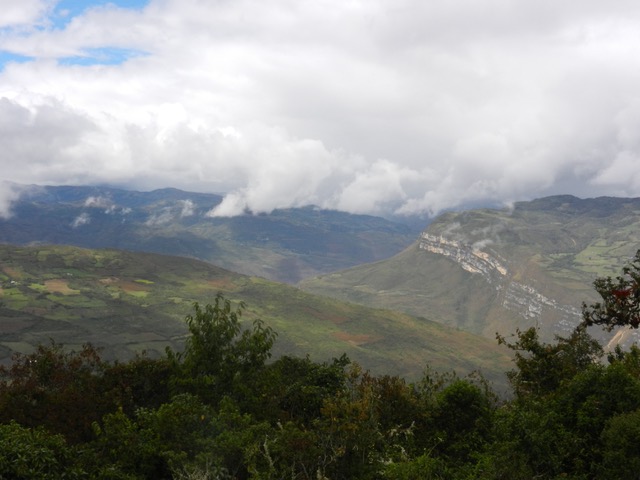 The next morning we set off for the Chachapoyas citadel of Kuelap, high in the cloud forest on a mountain top a 2 hours drive from town. Along the way the driver gets a call and  we stop and wait for an Australian / Canadian couple who missed the bus but we are soon on our way.  4 gringos and 16 Peruvians. Our guide Victor was excellent and did very well to switch languages throughout the day. 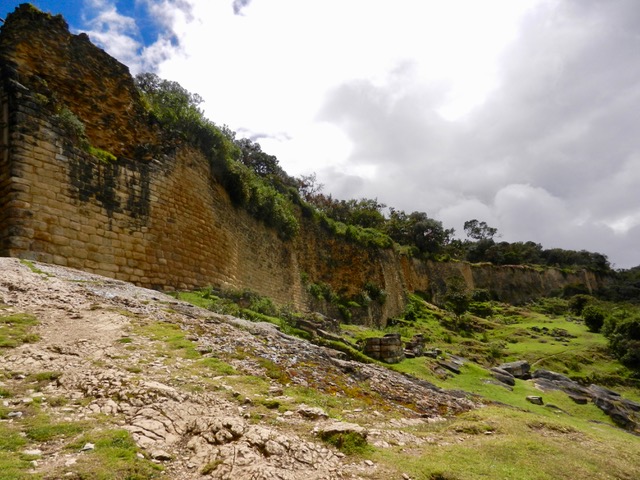 Meeting the Aussie/Canadian couple was a stroke of good fortune as they had just spent several month travelling the same route as us but in the opposite direction. We were able to exchange lots of tips on what to do and not to do, places to stay etc. sometimes half the joy of travelling this way is as much the people you meet along the way as the places you visit. 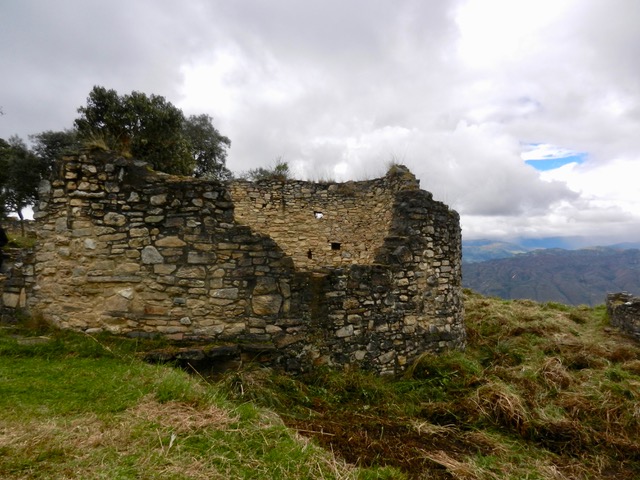 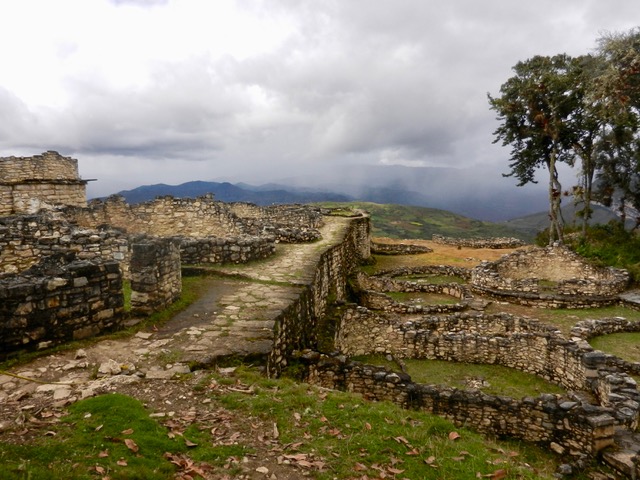 It is a long drive along steep, winding and dusty roads into the mountains. Once again the landscape is spectacular. Victor provides a commentary on the background to the history of the Chachapoyas people and the mystery surrounding exactly what happened to them to cause their demise. 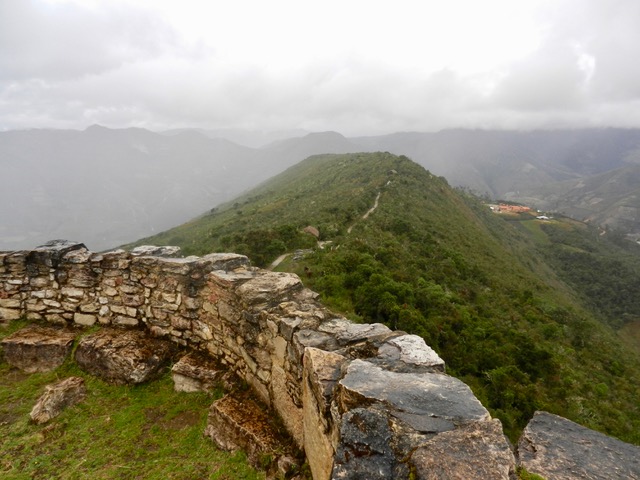 We have to walk for 20 mins from the entrance of Kuelap up to the entrance to the fortress (apparently there is now a cable car!). To say that this place is impressive is an understatement. Maybe not as majestic as Macchu Picchu, nor as dramatic as Pisac but, largely unrestored, it is arguable more impressive in its own way than both of these more famous sites. 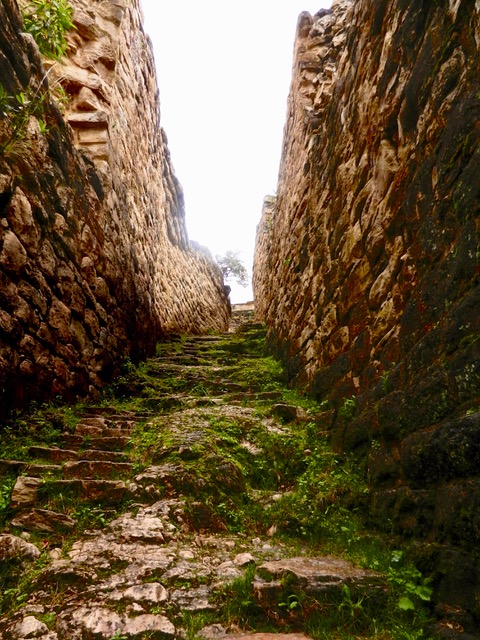 Chachapoyas architecture is very different from that of the Incas. The stones are much smaller and they used a form of cement to fix the stonework, unlike the Incas who built without any form of mortar. Most of all,  the houses are circular with and have no windows. 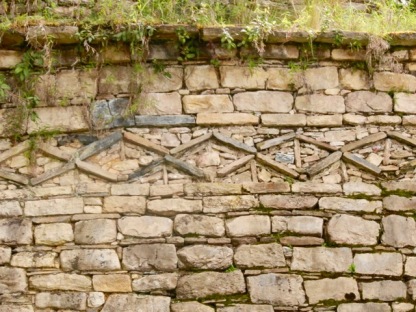 We enter through the “Llamas” entrance which is quite wide to start with but as we ascend the steep steps, it gets narrower until is is only one person wide. Apparently this was a defensive measure so that the occupants could pick off any attackers one by one with their slingshots! 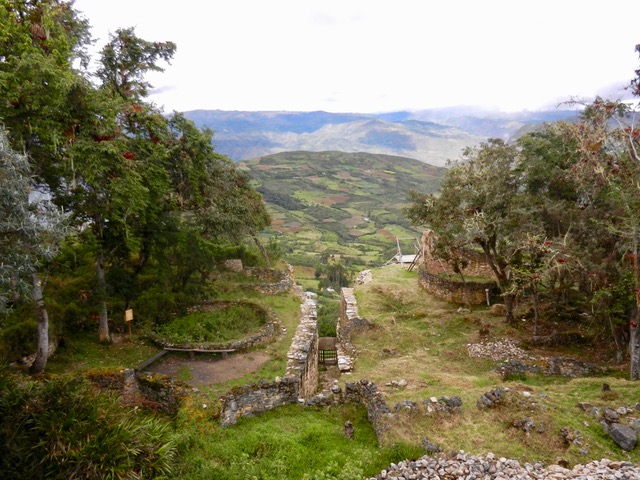 Inside the citadel we are treated to panoramic views of the surrounding countryside including the road along which we have just driven. Victor then shows us around the site explaining what the archaeologists  believe each part to have been. Although, as we would later find out, they are still not really certain as to what happened here to wipe out these people. Theories range from:

Whatever did happen, our guide Victor, brought it all to life with his vivid, if sometimes OTT explanations. The stories are fascinating but wecan’t help wondering that if these people had spent less time worshipping their gods, making human sacrifices etc.. and more time getting on with life, they may well have lasted a lot longer!

The other mystery lost in the mists of time is the exact purpose of this place. was it a fortress, a town, a palace or place of religious worship. Or maybe all of those

Much of the site is still over-grown but the authorities seem to have got the balance about right in terms of not over-restoring to the extent of similar places such as Macchu Picchu. 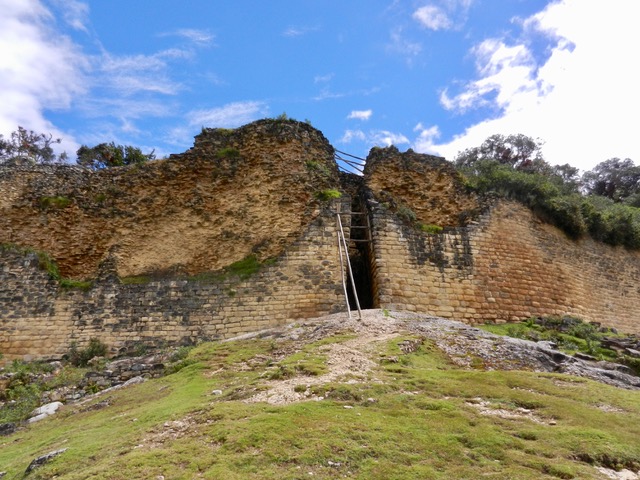 We spend 2 or 3 hours wandering the ruins as our guide points out the many places where human remains have been found. Huge numbers of skulls were found circular burial chamber at the peak of the mountain, most with implement shaped holes in the back!

It is an impressive place and we feel privileged to have been able to come here whilst it is still unspoiled by mass tourism. Definitely worth the three days of bus hell to get here.

As we head back to Chachapoyas, it starts to rain heavily and the storm continues overnight . Our original plan was to hike to the Gocta Falls, the third highest waterfall in the world and to visit the mountain top sarcophagi,  but the weather does seem a bit gamble so we decide that, rather than waiting around for the weather to clear, we will head down to Trujillo on the coast in search of sun and ceviche.